WATCH: Who were the artists who performed at the ASEAN gala dinner? 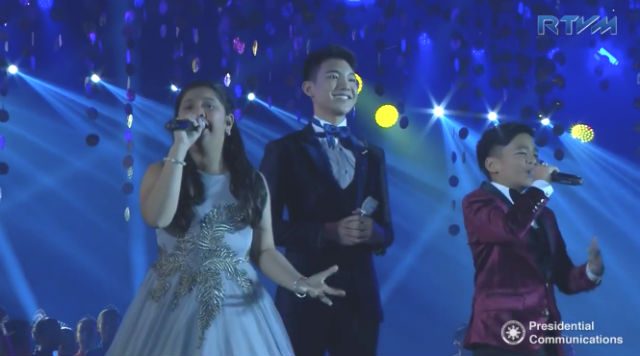 MANILA, Philippines – Association of Southeast Asian Nations (ASEAN) leaders and their dialogue partners were treated to performances of various artists during the gala dinner on Sunday, November 12.

Leading the performers was Asia’s Queen of Songs Pilita Corrales, who sang the song “Ikaw”. President Rodrigo Duterte even joined in the fun when he did a duet with the singer. According to Duterte, he sang “upon the orders” of US President Donald Trump.

Aside from being a singer, Corrales is a known comedian who starred in movies and TV shows in the 1950s. Among her most popular shows are Your Evening with Pilita, Ang Bagong Kampeon, Vampire Ang Daddy Ko, and The X Factor Philippines. She has two children who also went into showbiz – Jackie Lou Blanco and Ramon Christopher. She is also the grandmother of actress Janine Gutierrez.

In an interview with the Inquirer, Nes Jardin, who is the coordinator for all the ASEAN related cultural activities, said that it was Duterte who requested Corrales to join the AMP Band for the performance.

Aside from Corrales, Lani Misalucha, Jed Madela, Darren Espanto, Elha Nympha, Sam Shoaf, and Jona also performed during the gala dinner. The program ran for 30 minutes and was divided into 3 parts which also showed the performances of Filipino dancers and musicians. Lani Misalucha is known as “Asia’s Nightingale” for her ability to peform songs from various genres. She has performed in the international scene, most notably in Las Vegas with the Society of Seven. She was a judge in I Love OPM in 2016 and played the role of Sita in the musical adaptation of Rama at Sita. Jed Madela is no stranger to the music scene, having performed in and outside of the Philippines, he won the World Championship of the Performing Arts in 2005 and has recorded many albums, including his song intepretations of Celine Dion and Mariah Carey. He is also part of the ABS-CBN show ASAP. Jona started her career in GMA 7 as the winner of Pinoy Pop Superstar. She was part of the group La Diva with Aicelle Santos and Maricris Garcia. She is set to hold her concert Prima Jona On November 18 at the Solaire Resort and Casino.

Darren Espanto, who rose to fame as runner-up of the Voice Kids Philippines season 1 is an in-demand performer. He performed for international leaders such as Pope Francis and Mexican President Enrique Peña Nieto in 2015. He also performed at Carnegie Hall in 2014.

Elha Nympha was the season winner of the Voice Kids season 2 and appeared in Little Big Shots. She also recorded her version of “Beauty and the Beast” with Noel Comia Jr for the movie’s release last March.

Sam Shoaf is the son of singer Arnee Hidalgo and nephew of former Smokey Mountain member Jeffrey Hidalgo. He is known for his participation in Your Face Sounds Familiar Kids and was also part of The Voice Kids season 1 under Sarah Geronimo’s team. – Rappler.com