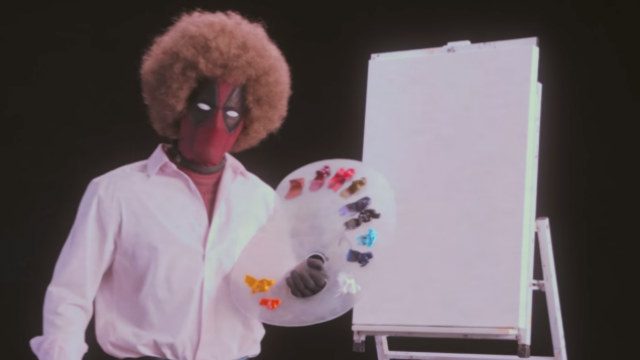 MANILA, Philippines – Deadpool has traded in his signature potty mouth and deadpan sarcasm to channel one of the nicest men to ever grace TV screens: Bob Ross.

In a new trailer for Deadpool 2, Deadpool, played by Ryan Reynolds, did an almost shot-for-shot recreation of an episode of The Joy of Painting, the hit educational TV show hosted by Ross in the ’80s. From Bob Ross’ signature afro to his calm, reassuring voice, to his legendary over-all niceness, Deadpool got the act down pat. (WATCH: First ‘Deadpool 2’ teaser released)

That trademark Deadpool crassness couldn’t be held back for long though, and after mixing colors like “Soylent Green,” “Yellow Snow,” and “Betty White,” the anti-hero steps back and admires his handiwork.

“Sweet baby Jesus. Wish I could jump in there and roll around in all that cascading white powder. Just get high on all of life’s splendor… God I love cocaine,” he said.

The painting demonstration is cut short after a particularly vigorous paint brush cleanse (“whacking off,” as Deadpool suggests), and we are shown a quick glimpse of the film, with characters such as Cable (Josh Brolin), and a lot of guns ready to fire.  The video ends with Deadpool reverting back into full Bob Ross mode, saying “Hugs not drugs.”

Deadpool 2 stars Ryan Reynolds and scheduled for release in Philippine theaters on May 30, 2018. – Rappler.com