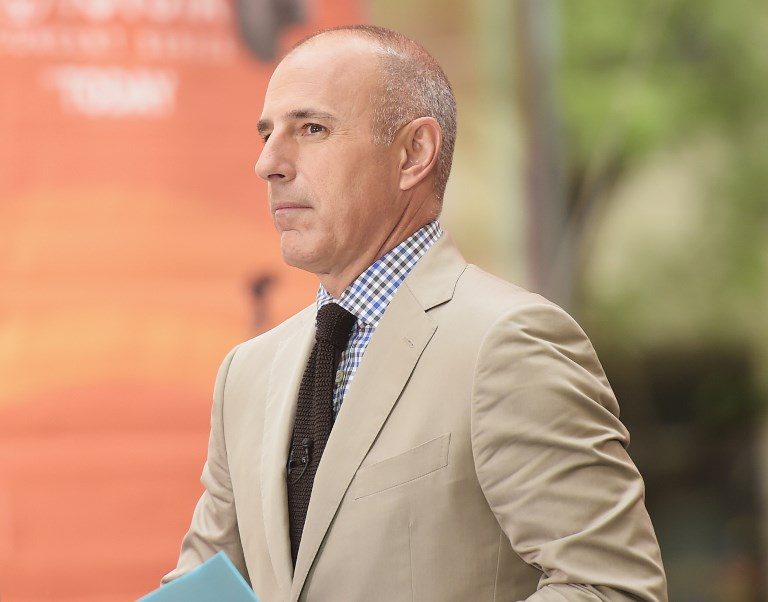 Facebook Twitter Copy URL
Copied
(UPDATED) NBC News says Lauer, one of television's highest-paid personalities, was fired after they received a 'detailed complaint' about 'inappropriate sexual behavior in the workplace' by Lauer

MANILA, Philippines (UPDATED) – Top US broadcast journalist Matt Lauer, who has been the co-anchor of the top-rated morning show Today on NBC, was fired by the network on Wednesday, November 29, after a detailed complaint of inappropriate sexual behavior at work.

NBC News Chairman Andy Lack, in a memo to staffers Wednesday, said that they “received a detailed complaint” on Monday, November 27, about “inappropriate sexual behavior in the workplace” by Lauer.

Lack said: “It represented, after serious review, a clear violation of our company’s standards. As a result, we’ve decided to terminate his employment.”

“While it is the first complaint about his behavior in the over twenty years he’s been at NBC News, we were also presented with reason to believe this may not have been an isolated incident,” the memo continued.

Lauer has been part of the Today show, the top-rated morning show in America, since 1994, 19 years of which as one of the main co-anchors.

He is also reportedly the highest-paid TV news personality, with a contract estimated to be worth $25 million annually.

Lauer’s firing follows that of another veteran broadcast journalist, Charlie Rose. Rose, 71, one of America’s most respected news anchors, was fired November 21, after allegations of sexual misconduct, with incidents allegedly coming as far back as the 1990s.

Rose was a co-anchor of Today rival CBS This Morning, and is the host of a syndicated talk show bearing his name.

Lauer is the latest high-profile personality whose high-flying careers came to an end due to accusations of sexual misconduct, from assault to harassment. – Rappler.com