MANILA, Philippines – K-pop rock band CNBLUE ended their “Between Us” concert tour with a bang as they performed for their Filipino fans last Saturday night, December 9, at the Smart Araneta Coliseum.

Fans waved their blue lightsticks as the band kicked off the show on a multi-LED stage with the Korean version of “Radio,” a song originally from their Japanese studio album Wave.

As early as their second song “When I Was Young,” Yonghwa already indulged some fans with selfies. The band went on to sing two more songs – “Domino” and “I’m Sorry” – before they introduced themselves. Yonghwa, the group’s lead vocalist, showed off with a few Filipino expressions he learned, including the colloquial term “petmalu” – a play on the Filipino word “malupet” or amazing.

“I’m your lodi Yonghwa,” he said as he introduced himself. “Lodi” is also a Filipino colloquial term, the reversed spelling of the English word “idol.” They continued the show with “Can’t Stop,” a song off an album of the same name, followed by “It’s You.” We won’t forget Yonghwa’s aegyo (cute display of affection) during the “Love Girl” performance; at that point, the boys already looked very much at ease with the Manila crowd.

After playing “Sweet Holiday” and their funky hit song “Love,” Yonghwa again practiced his Filipino by calling his fans “mahal na Boice (our beloved Boice)” and asking the crowd, “Alam ‘nyo po ito? (Do you know this?)” referring to the song “Lie.” They also performed “Blind Love,” “Royal Rumble,” and “In My Head,” after which the other members took turns talking to their Filipino fans.

“I can feel your energy all the way from here,” Minhyuk added. But the band’s wildest stage was hands down during their “Wake Up” performance, which came after they played “You’re So Fine” and “Face to Face.”

Yonghwa did a guitar solo during “Wake Up,” while both Jungshin and Jonghyun playfully used their guitars as guns, aiming them at Minhyuk who did his own thing on the drums. “Yes, I’m your lodi,” Yonghwa told fans while catching his breath after the song.

But their exhaustion did not show during “Feeling,” when the two danced together, much to the fans’ delight. The band also played “Coffee Shop” before launching into a very energetic rendition of the much-awaited song, “Cinderella.”

They teased the fans by announcing that “Between Us” was their last song. They even left the stage, only to return a few minutes after to play “Catch Me.”

The boys also played an acoustic set, with Yonghwa changing parts of “Isn’t She Lovely” to woo the fans: “Oh my Manila, I’ll love you forever.” 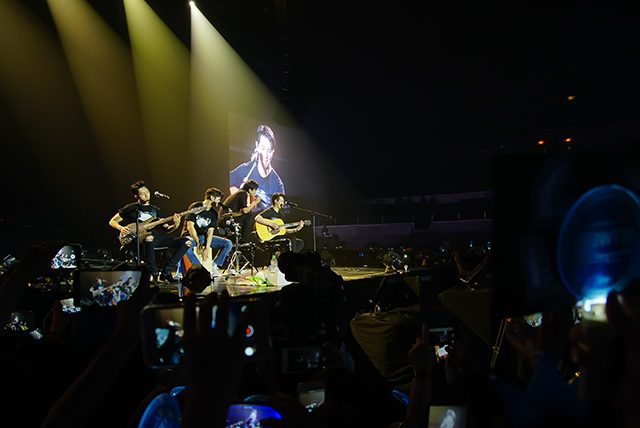 Their most intimate stage was during an acoustic rendition of “Manito.” The phrase “neoreul saranghae (I love you)” filled the coliseum, as each member sang with the audience.

Minhyuk appeared to be the crowd favorite, with fans screaming every time the cameras focused on him. In response, Minhyuk showed his own brand of aegyo.

The show culminated with the song “Young Forever.” Before leaving the stage, the boys promised to be back in the country soon, and we truly can’t wait for the next time they own the Philippine stage again. – Jam Aguilus, Keb Cuevas, Jee Y. Geronimo, and Don Kevin Hapal / Rappler.com