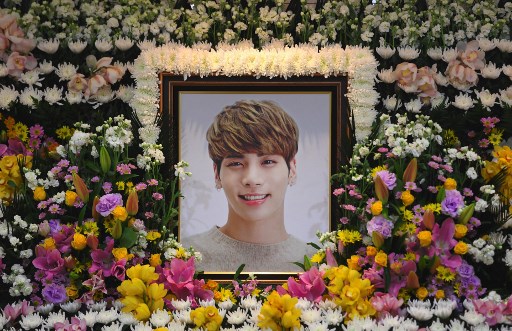 According to Yonhap News Agency’s translation, “Jonghyun is the best artist who loves music, enjoys the stage, and cherishes communicating with fans through music.”

The statement ended with, “We will remember you forever.” 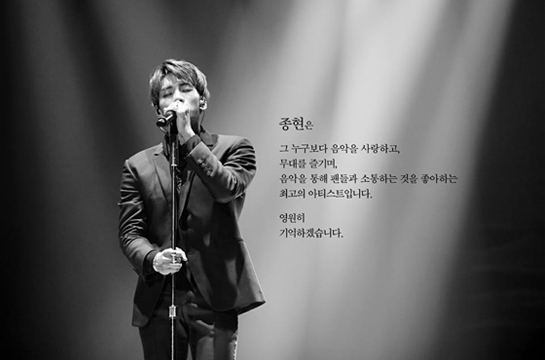 The official social media accounts of the group also changed their display and cover photos to black.

Korean pop stars, whom Jonghyun worked with for the past 10 years, also expressed their grief on their social media accounts.

Former EXO member Huang Zitao wrote a statement in Korean showing his sadness over the loss of Jonghyun, whom he considered his senior. He said, in a translation provided by fans, that one of Jonghyun’s songs motivated him to work hard.

“The first time I’ve been to the TV station was also the first time I’ve heard the song ‘Hot Times,’ it left a beautiful memory to me,” he said. “Because of this song and its stage, it made me want to practice more so I could stand on stage as soon as possible.”

Day6 member Park Jaehyun also tweeted that Jonghyun was one of his first Korean influences.

As one of my first Korean influences, my heart aches for this tragedy. From the bottom of my heart, may he rest in peace.

FT Island’s Lee Hongki, whose band debuted around the same time as SHINee, updated his Instagram with a picture of him and Jonghyun, expressing his sadness and wishing that Jonghyun would find happiness at last.

Jo Kwon from 2AM posted an image of his performance with Jonghyun on Instagram. His caption said, according to a translation from Soompi, “A shining boy has become a star. May you rest in peace.”

In light of Jonghyun’s death, Pledis Entertainment canceled the airing of its variety show Going Seventeen this week. Seventeen member Hoshi is known to be a huge fan of SHINee.

This is PLEDIS Entertainment. ‘GOING SEVENTEEN EP.28’ that was supposed to be released 10:10pm today (18th) will take a pause for a week. We would like to apologize to CARATs who have waited for ‘GOING SEVENTEEN’ and to ask for your kind understanding.

Fans from all over the world also showed their support for SHINee as they mourned Jonghyun’s death.

Tearful Korean SHINee fans visited an altar for the K-pop star at a hospital in Seoul. 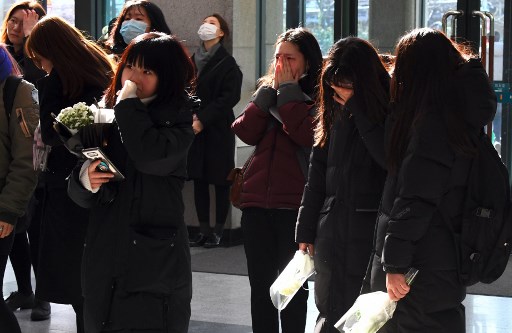 In a vigil organized by Team SHINee Chile, fans are captured in a video singing SHINee’s debut song “Replay” or “Noona, You’re So Pretty.”

SHINee fans gather to commemorate Kim Jonghyun who died on Monday, December 18, in an apparent suicide in an apartment in Gangnam | @rapplerdotcom pic.twitter.com/lxi4DzhDMX

Fans shared their memories in an open mic session, recalling how Jonghyun became an inspiration in their lives. They also offered flowers and wrote their messages for the late singer on a wall.

SHINee World PH gives out roses and papers to fans to write their message for Korean singer Kim Jonghyun. Fans set up their notes for him on a wall. | via @jamaguilus pic.twitter.com/SGfrNY3TD6

A second vigil will be held on Saturday, December 23, at the Korean Cultural Center in Taguig City.

On social media, fans all over the world put up a rose as their display photo to pay tribute to Jonghyun.

a shawol made a project, it’s called #RosesForJonghyun. Instead of using plain white icons, please use this instead since it has been mentioned that Jonghyun loves red.
I hope everyone participates.
RT TO SPREAD THE PROJECT pic.twitter.com/FStcEzWg5P

Jonghyun lamented that he felt “broken from inside” and “engulfed” by depression in a suicide note, it emerged Tuesday, December 19, as his death sent shockwaves among fans worldwide. – Rappler.com