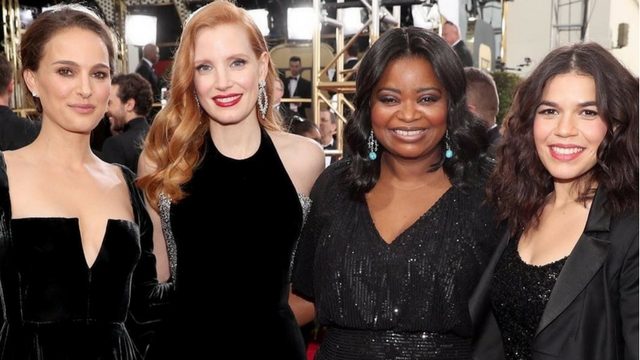 This year, many celebrities traded their colorful red carpet attire for stark black as a show of solidarity for those protesting sexual abuse and inequality in the industry, following the downfall of movie mogul Harvey Weinstein in October 2017. (READ: Hollywood gets party season started at glitzy Golden Globes)

Stars tagged their red carpet photos with the hashtag #TimesUp, the name of the initiative launched by women in Hollywood to shed light on the widespread discrimination, abuse, and harassment in show business.

“People are aware now of a power imbalance. It’s led to abuse in our industry. It’s everywhere,” Meryl Streep, who is vying for a Globe for her work in media drama The Post, told E! network on the red carpet.

Streep – who has come under fire over her denials that she knew about Weinstein’s misconduct – brought Ai-jen Poo, the head of the National Domestic Workers Alliance, as her plus one.

Here with some of my favorite people #GoldenGlobes #ThisIsUs

Can you tell we’re happy to be here? #GoldenGlobes #ThisIsUs

Will & Grace back at it on the #GoldenGlobes Red Carpet! Looking good, @therealdebramessing and @eric_mccormack!

Incredible Issa. Hilarious and witty in her disposition, resolute in her ideals, Issa Rae is a #pgmuse who radiates beauty from the inside out. It is an honour to have her wear Atelier Prabal Gurung to the impactful 75th Annual Golden Globe Awards, for which she is nominated for Best Actress for her show Insecure. Issa wears the Atelier Prabal Gurung black liquid chiffon deep v gown with gathered sculptural shoulder ruffle and extended back strap. Styled by and with special thanks to @jasonrembert. #pgworld #pgmuse #issarae #timesup #goldenglobes #modernglamour #femininitywithabite #beautywithsubstance

The ladies of Game of Thrones looking. @emilia_clarke & Gwendolyn Christie at the #GoldenGlobes!

Call them by their names: @tchalamet and @armiehammer are on the #GoldenGlobes Red Carpet!

The cast of @itonyamovie, Margot Robbie, @imsebastianstan, and @allisonbjanney dazzle on the #GoldenGlobes Red Carpet!

Everyone needs a little black dress or a crisp white shirt in their wardrobes. Visit Zalora for your wardrobe update now!