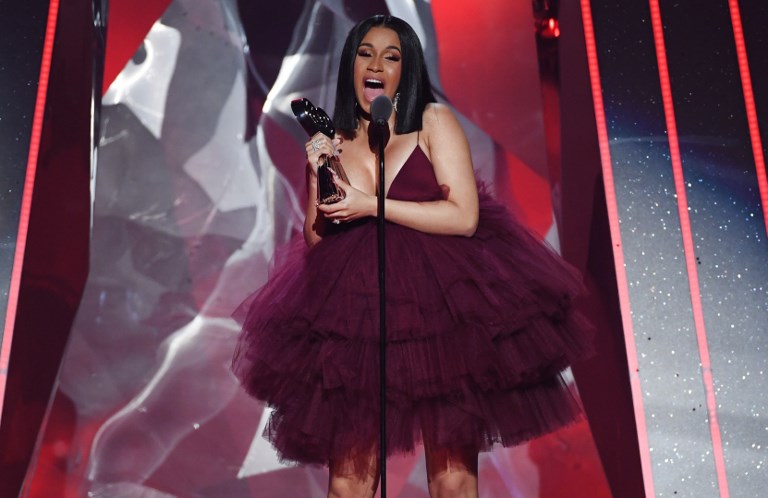 NEW YORK, USA – A day after releasing one of the most eagerly awaited rap debut albums in recent years, rapper Cardi B made another splash – revealing she is pregnant.

In a teasing confirmation to persistent pregnancy rumors, Cardi B took the stage twice on Saturday Night Live, first concealing her body with a fulsome feather boa as she performed her breakout single “Bodak Yellow.”

When she returned to rap “Be Careful,” a track off her debut album Invasion of Privacy that came out Friday, Cardi B donned a body-hugging white dress and smiled knowingly as the lights shone on her protruding belly.

Cardi B is engaged to Offset of rap trio Migos, who shortly after his fiancee’s television appearance confirmed the pregnancy on Instagram, writing, “We feel so blessed.”

Cardi B, a Bronx native whose real name is Belcalis Almanzar, has quickly found stardom with her hard-driving rhymes that unsentimentally tell a story of a rough life that included a stint as a stripper.

“Bodak Yellow,” released less than a year ago, made her one of the most watched names in rap – a genre dominated by men and, often, by machismo.

She raked in top prizes including single of the year at last year’s BET Hip Hop Awards, leading to high anticipation for her debut album – and she is not letting the pregnancy slow her down.

The rapper is due to perform next weekend at Coachella, the premier US music festival – whose top headliner Beyonce pushed back her appearance by one year as she gave birth to twins in 2017.

The gossip site TMZ earlier reported that Cardi B is due to give birth in early July. –Rappler.com