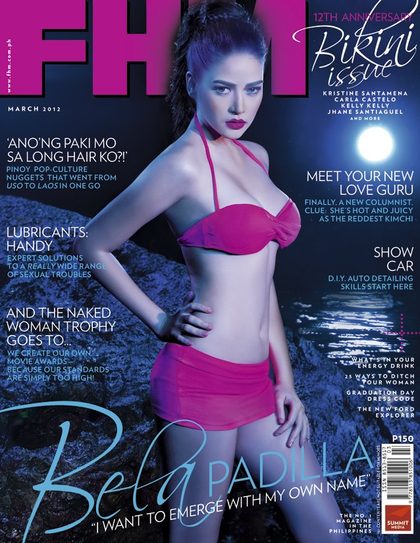 The new cover still features actress Bela Padilla but this time without any of the black models who graced the original cover. Instead of the text “stepping out of the shadows” used on the original cover, the new one says, “I want to emerge with my own name.”

Padilla, who grew up around Robin Padilla and his kids, explained to Rappler, “I come from a long line of actors. The last generation of Padillas made it big. I want to make a name of my own.”

Padilla said she has already seen the new cover, saying, “It’s just as good as the last one. I hope people grab a copy.” Padilla said FHM did not change the story, “It is good so people can see, we didn’t hit anything or anyone, we didn’t step on anyone’s toes.”

The half-British actress also told Rappler that her decision to pose for FHM was symbolic of a new confident her. “I think I gained a certain level of confidence. The last 3 years have changed me a lot, meeting all sorts of people. It comes with age also.”

In FHM’s statement on the matter, the magazine apologized for the cover execution and promised to be more sensitive next time.

“We took all the points into consideration and have decided to take the side of sensitivity.”

The recall also sparked international interest. A day after the recall was announced Padilla was interviewed live on BBC. Other news outfits including Time and the Huffington Post have also done stories on the issue. – Rappler.com