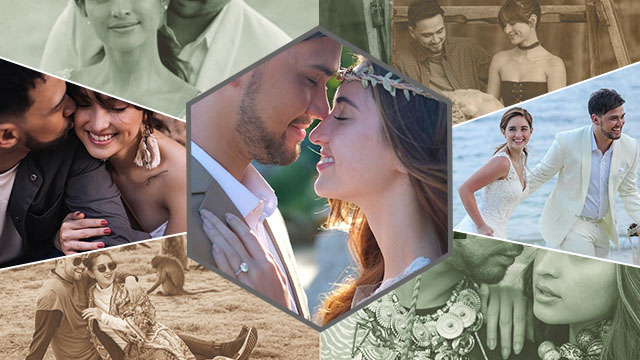 MANILA, Philippines – April 20 is a big day for star couple Coleen Garcia and Billy Crawford, as they are set to tie the knot before their family and friends at Balesin Island.

With one of the most talked about weddings expected to happen in a few hours, Rappler takes a look back at the 3 prenup photo sessions the couple had which had the internet buzzing.

Thailand is one of many destinations that Coleen and Billy have frequented.

“The real us is pure love, pure light”  @billycrawford and @coleen prenuptial shoot shot in Koh Samui, Thailand  With @merrytomarry #niceprintxmerrytomarry Special thanks to @labellefete

Last year, Coleen and Billy traveled to Ethiopia for a vacation and a photo shoot for Ethiopian Airlines. The photos, however, became controversial when netizens called them out for what they said were “distasteful” pictures.

The said photos have been removed. Billy later came out with a statement to say they never meant to offend anyone. (READ: Coleen Garcia, Billy Crawford address ‘distasteful’ prenup photos)

It’s been way too long.. Really excited to FINALLY share our #Ethiopia photos with you guys! Watch this space  I’m telling you, our team was just as AMAZING as our journey in this country. #EthiopYEAH — ( @dmetroman @mymetrophoto)

Days before the wedding, Metrophoto released the 3rd and official prenup shots of the couple. From Thailand and Ethiopia, the 3rd set was shot at Casa Bendita in Rizal province.

Unlike the glam shots in Thailand and Ethiopia, the Casa Bendita shoot featured more relaxed moments. The couple’s pet dog was even part of the shoot.

“We wanted to make everything look natural yet still very beautiful…. Most [of] the shots were just really candid moments of the couple without any instructions from us,” said Oly Ruiz in an interview with Metro.

Congratulations to the couple as they start their new lives together as husband and wife! Which prenup shoot was your favorite? –Rappler.com