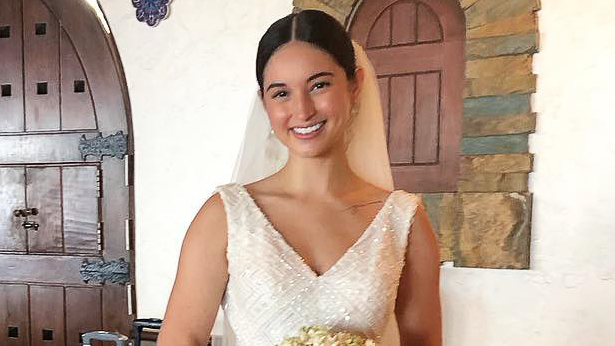 The blushing bride’s dress was sleeveless and had a demure v-neck cut. It was beaded from top to bottom and featured a short train. Her sheer veil trailed behind her.

To complete the look, Coleen wore her hair up and away from her face, with a neat middle part. Her hair was done by Renz Pangilinan, while her makeup was by Pong Niu.

The bride @coleen right before she walked down the aisle to say “I do” to @billycrawford. Her wedding dress is by Israeli designer @galialahav. Best wishes! #ColeenGotTheBill

With God in the center of their relationship: What a beautiful wedding @billycrawford @coleen #ColeenGotTheBill

What do you think of Coleen’s wedding day look? Sound off in the comments! – Rappler.com