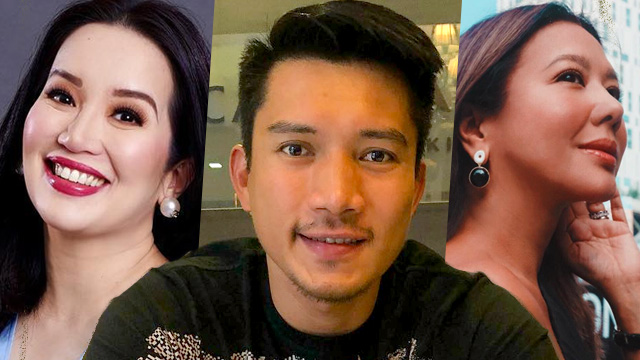 MANILA, Philippines (UPDATED) – Kris Aquino is not yet done.

The “Queen of All Media” turned to social media – Instagram, Twitter, and Facebook – to lash out against her former daytime show co-host Korina Sanchez over a feature that the latter did on Kris’ ex-husband, basketball player James Yap.

(I have really had enough. It’s simple – my brother rarely asks me for anything – never for himself but for the candidate he endorsed. I love him so I did it. All the criticism I got, I accepted. Thrice I went to Davao – during the 2010 campaign, the 2013 campaign for Senator Francis Escudero and Senator Grace Poe, and for Kris TV. PRRD, in all those instances, showed nothing but kindness towards me.)

(The feature that the wife of Mar Roxas came out with today is a slap to my face. Yes, I am taking this personally because I put my and my children’s future on the line without expecting anything in return. And the apparent payback for me and my children is a feature on a deadbeat father. I apologize to my brother, as well as to my godmother who is Mar’s mother – but it’s clear now why it was Duterte who won as president.)

Her post, which is going viral on social media, ended with an emoji of a fist – Duterte’s trademark sign.

While Kris did not name Korina in the post, she was clearly referring to the Rated K host. Korina is the wife of defeated 2016 presidential candidate Manuel “Mar” Roxas II.

In answers to questions in the comments section, Kris said she felt the interview could have been aired at a different time – and not when her sentiments against James were still fresh.

(It’s a slap to my face when the man who disrespected me and Bimb several times is praised. I’ll raise this against her – mothers, including myself, starred in a TVC for Mar. Is it really difficult to show a little delicadeza and wait for the issue to die down? I’m not asking that I be considered a friend. Just don’t hit me.)

Kris and Korina were once co-hosts in a morning show that aired on ABS-CBN.

Kris, the youngest daughter of former president Cory Aquino and sister of Duterte’s predecessor, Benigno Aquino III, endorsed Liberal Party (LP) candidates during the 2016 elections, including Roxas. She drew flak for using the presidential helicopter then to attend a campaign sortie.

Over the weekend, Kris lashed out against James, her ex-husband with whom she has a child, Bimby. Kris vented on social media in reaction to statements that James had made about the 11-year-old Bimby. – Rappler.com