‘Brooklyn Nine-Nine’ got saved! Here’s why you should be watching it 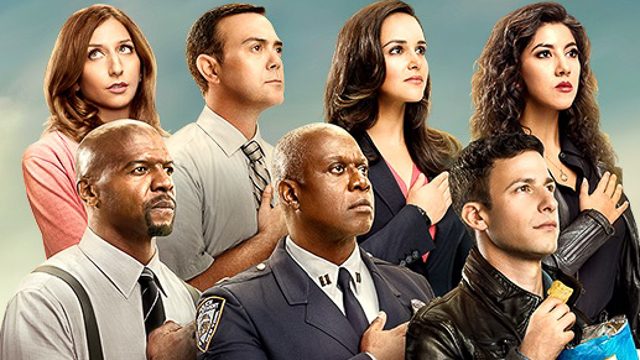 Last week was an emotional rollercoaster ride for fans of Brooklyn Nine-Nine.

Fox announced it was killing the critically-acclaimed police comedy after 5 seasons. The Nine-Nine’s ratings had been steadily dipping over the years, but the show was far from washed-up – on the contrary, season 5 saw the show reach a new creative peak.

Fans, understandably, were devastated. There was an outpouring of grief, at an intensity usually reserved for deceased heads of state. Thankfully, the grief wouldn’t last very long, because NBC swooped in and saved the show from cancellation. (NBC is also home of The Good Place, another show by Brooklyn Nine-Nine creator Michael Schur.)

If you haven’t seen Brooklyn Nine-Nine yet, now’s a great time to get onboard. Season 5’s second to the last episode just aired, so that gives you 5 (in the words of Detective Boyle) succulent seasons to binge on.

If you need a little more convincing, I humbly submit the following evidence for your perusal:

Brooklyn Nine-Nine has one of the greatest casts on TV

Yes, Andy Samberg can be a bit… hit or miss at times. (Celeste and Jesse Forever was great, but I still haven’t forgiven him for Hot Rod) But here, Samberg shines as manchild Detective Jake Peralta. And while he’s the de facto lead, he’s just one small part in an extremely talented, and uproariously funny, cast.

Ensemble casts may take a few episodes, or in the case of Parks and Recreation, a few seasons, to fully gel. But that isn’t the case with Brooklyn Nine-Nine. Right out of the gates, everyone just hits it off. Check out the “Oldest Bag” scene from the first season:

Captain Raymond Holt is a treasure

Andre Braugher, who plays the Nine-Nine’s deadpan captain, is famous for his dramatic roles. But here he uses that stony demeanor to great effect. Captain Holt truly shines when dishing insults to his nemesis, the deputy chief and, “fork-tongued lizard witch” Madeline Wuntch:

The show is big on LGBT representation

Captain Holt happens to be gay, and just this season, the badass Detective Rosa Diaz came out as bisexual. The show avoids turning them into mere tokens or, worse, caricatures, by dedicating ample time to their characters.

For example, Holt considers his position a major breakthrough after facing racism and homophobia in the 1970s, and as a result, is extremely protective and meticulous about his precinct.

Rosa’s coming out also reflects actress Stephanie Beatriz’s own disclosure. Detective Diaz is extremely private, borderline paranoid, so by the time she makes the announcement to her team, it feels like we’ve earned her confidence.

In addition to LGBT issues, Brooklyn Nine-Nine has also tackled other timely topics, including racial profiling:

While Brooklyn Nine-Nine does a great job of addressing social issues, don’t let that distract you from the fact that the show is, in the words of Peralta, “real world Die Hard.” Peralta is the precinct’s most productive detective, but being a cop to him means playing out his ’80s action movie fantasies, often to hilarious effect.

Every Halloween, Peralta and Holt engage in a competition to determine who between them is the “amazing detective/police captain-slash-genius.” The competition centers around a heist, usually to nab a precious item belonging to Holt.

Jake Peralta and Doug Judy: a bromance for the ages

Speaking of recurring episodes, every season has a Doug Judy, aka the Pontiac Bandit, episode. Judy is a crafty car thief who always slips away from Peralta, but through the years the two have formed an unlikely bond, mostly over spontaneous rapping and singing.

In closing, here’s one of the funniest scenes in the show’s history: