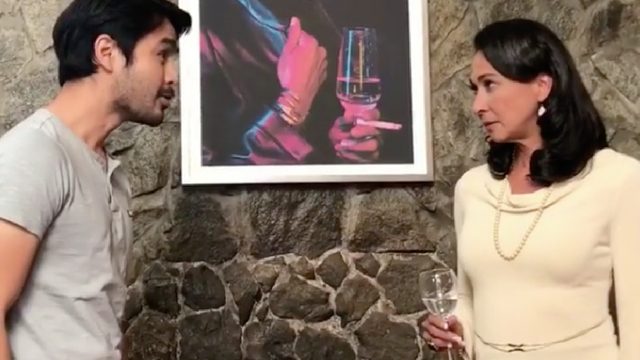 MANILA, Philippines – Among the most immortal kontrabida moments in Philippine cinema is Cherie Gil’s scene in the 1985 film Bituing Walang Ningning – yes, that one where she throws water in Sharon Cuneta’s face after uttering the iconic line, “You’re nothing but a second-rate, trying hard, copycat.”

Now, the actress is bringing the scene back to life as she re-enacts it with various people with the aim of reaching 100 “victims” of her character Lavinia Arguelles’ wrath – and she’s putting it all on Instagram.

On the account, @the_real_lavinia_arguelles, Cherie posts videos of her throwing water in faces of people including ad exec David Guerrero, chef JP Anglo, director Ricky Davao, journalist Atom Araullo (who had to do two takes, because in the first take, the water just flew off him), and Kasal stars Derek Ramsey and Paulo Avelino. (Bea Alonzo gets spared because, as Cherie said, “sayang makeup”).

That’s a total victim count of 8 so far (including the original Sharon Cuneta), and we’re pretty sure she can easily get to 100 – because really, if Cherie Gil wants to throw water on your face and call you a second-rate trying hard copycat, you let her do it, no questions asked.

Who else would you like to see get the Lavinia Arguelles treatment? Sound off in the comments! – Rappler.com