Westworld: ‘The Passenger’ is a fitting season finale 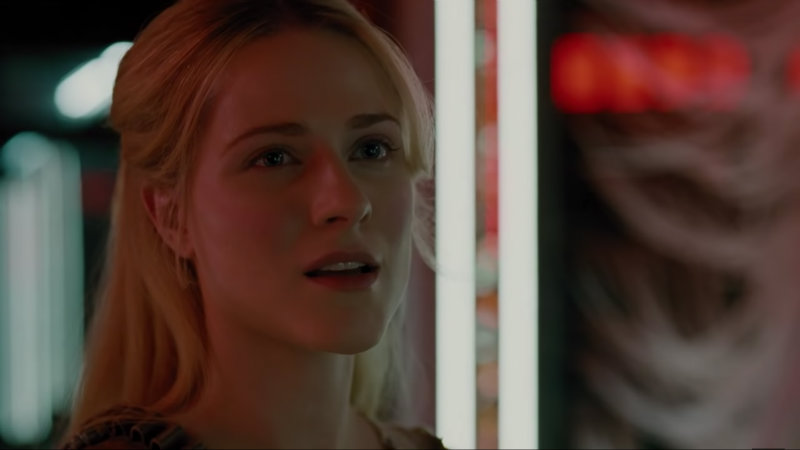 That is the sum total of James Delos’ entire cognition; a lifetime’s worth of decision-making and malignancy encapsulated in a simple algorithm. That algorithm shows just how small we humans are. We can aspire for greatness, but at the end of the day, we’re just these squishy bags of meat making simple, predictable decisions.

This what Dolores and Bernard learn when they finally enter the Valley Beyond.

The Valley, or the Forge, as it is called by park personnel, contains the records of all the guests who ever set foot in the park. They interface with the database, and enter the recording of James Delos’ consciousness. The UX of the Forge resembles that of the Cradle; Dolores and Bernard enter the Mariposa, where they see the “baseline” Delos. When they step out of the saloon, they find a version of Delos as extrapolated by the park system to his most violent extreme.

The two wander further and meet the apparent admin of the Forge, who takes the form of Logan Delos. Digital-Logan comments that one of the essential traits of Hosts wasn’t that they were simple, it was that they were too complex.

Humans, on the other hand, are subject to simple drives, such as love and pride, and as a result, are easier to deduce. So easy, in fact, that the amount of code could fit in a regular-sized book. These records take the form of a literal library, and it’s one of the more memorable settings in an episode packed with stunning visuals.

When in doubt, go to the library

Digital-Logan reveals that it was actually Bernard, our favorite amnesiac, who instructed him to give Dolores everything she needs. As she is, Dolores wouldn’t be able to survive in the outside world. But with access to the library, Dolores would gain valuable insight into the workings of the human mind and, as a result, a better chance of survival (or domination?).

While the first season of Westworld dealt with awakening and sentience, this season tackled choice. Congratulation for waking up! Now what?

The Valley Beyond presents Dolores with two options: use the intel in the library to aid her in infiltrating the outside world, or rebuild a new one in a digital Eden stored in the Forge. Bernard subconsciously opens the gate to Eden, and the Hosts, who had been marching towards the Valley Beyond, witness the opening in their minds. There’s something biblical about a group of former slaves wandering the desert in search of a promised land. The opening of Eden’s gates even resembles the parting of the Red Sea in the Book of Exodus.

It would have been easy for Ford to program Dolores to make certain decisions that would have ensured the Hosts’ survival. But denying Dolores’ the ability to decide would have been regressive. This is Dolores’ final test, and it definitely isn’t open notes.

The hosts have made their own decision to move to Eden, but Dolores disregards their choice. She comments that Eden is just another false promise, and decides to flood the valley (another biblical theme). To Dolores, only the real world is real enough.

In “The Passenger,” those decisions come after a season’s worth of build-up and mystery. Before the gate to Eden opens, Akecheta reassures his doubtful companion Wanahton: “We have died countless times. If we die once more, at least the story was our own.” We know there’s a world waiting for them on the other side, but we can still appreciate the conviction it takes to travel across the desert without a guarantee they’ll ever find what they’re looking for.

The Hosts haven’t just learned how to choose. They’ve learned how to have faith; to believe. Introducing the element of faith to the Hosts’ cognitive vocabulary is perhaps one of this season’s greatest developments. And in this season’s finale, that belief is rewarded. (At least until Dolores floods everything — she is the Deathbringer, after all)

“The Passenger” beautifully cuts from Akecheta saying “at least the story was our own” to the scene where Sizemore claims Hector’s dialogue as his own. When Delos QC catches up with Maeve’s group, Hector valiantly offers to hold them off while Maeve and the rest escape.

“You wanted me? Well, let this be a lesson…” he tells the Delos crew before getting cut off by Sizemore. He tells Hector to take Maeve to safety and then quips “It’s my fucking speech anyway.”

Sizemore unloads shotgun shells at the Delos crew while continuing the speech in all its overwrought, Shakespearean splendor. “… and the lesson is, if you’re looking for a reckoning, a reckoning is what you’ll find,” he says.

“If you’re looking for a villain, then I’m your man.”

Sizemore eventually falls, and it’s one of the most heart-wrenching deaths in the show. Partly because human deaths are permanent, but mostly because Sizemore’s character arc has been really good this season. He started out as a caricature for a depraved creative, but later redeemed himself and became a sympathetic character.

A change of mind

Besieged by guilt over Dolores’ death, Bernard decides to rebuild her. But instead of building a new Dolores body, he makes a copy of Charlotte’s, and implants Dolores’ consciousness to it. The two Charlottes meet each other in the basement of the Mesa, but the encounter doesn’t last long. Dolores kills Charlotte, and assumes her identity.

After everything, Dolores decides to save Eden. But instead of letting Eden stay within the Forge, where park personnel can tamper with it, she beams the data to an undisclosed location. (My guess is Arnold’s old home). She then tells Bernard “there was never any way for us to escape – not as us” before shooting him.

Dolores-as-Charlotte leaves the park on one of the rescue boats. In her bag are several Host control units. She later returns to Arnold’s home, where she reconstructs her old body and Bernard’s. It’s worth pointing out that Charlotte’s copy is still mobile — can Dolores upload her mind to a second body? Will Dolores use Host Charlotte to destroy Delos from within?

“The odds aren’t very good,” Dolores tells Bernard. But even with their divergent methods, Dolores affirms that it’ll take both of them to survive.

“But not as allies, not as friends” Dolores proclaims. In the end, they agree to disagree.

Bernard steps out of Arnold’s home, into a new world, and the end of this season. — Rappler.com