Latest Brad Pitt flick is on the ball 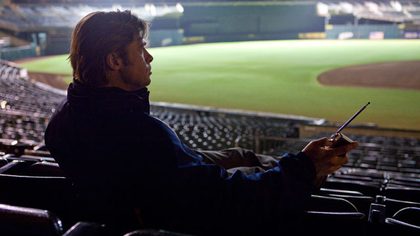 It does not bear a manufactured momentum that piles on one dramatic moment after another. It does not come off as an adrenalin rush, where the tension inherent to a nerve-wracking ball game is recreated in all its palpable splendor.

And the film is largely free from the noise of other sports flicks that would pump up the soundtrack’s volume while mimicking the din of stadium games.

Instead, Miller, working from a script first penned by Steven Schindler’s List Zaillian then rewritten by Aaron The Social Network Sorkin (after original Moneyball director Steven Soderbergh somehow got the boot), goes for a nuanced, graceful rendition of a true story that mostly took place far from the centerfield: of how Oakland Athletics general manager Billy Beane, once a promising rookie draft pick, assembled a gang of underrated hitters and pitchers that his team’s puny budget could afford and went on to make baseball history.

As such, Moneyball is the umpteenth iteration of the David-versus-Goliath mythos, with Beane steering the Oakland A’s against tradition, beating the established recruitment system in favor of overlooked statistical merits.

Beane, played with broad-shouldered bravado by Pitt, is able to do this through a goldmine of an analyst-turned-assistant general manager, Peter Brand (a fictitious character partly based on Oakland A’s real assistant GM, Paul DePodesta, and portrayed by the otherwise pesky Jonah Hill).

Brand is a baseball aficionado who specializes in “sabermetrics” player analysis and one that makes him better able to mine players’ deeper, database-recorded pros and cons almost at savant levels. While this radical strategy allows Beane to recruit players undervalued by his richer competitors (his team’s total salary stops at $41k-plus against, say, the New York Yankees’ $125k-plus), it also makes the OA GM something of a rebel.

This is a trait Moneyball drives home by showing Beane’s office as having a framed poster of the 1982 Oakland concert of the punk band The Clash along with a framed photo of Clash vocalist-guitarist Joe Strummer. (Another Joe guitar player, Joe Satriani, cameos for an electric take on “The Star-Spangled Banner.”)

And for the most part, it calls to mind a non-sports drama, the Robert DeNiro-Robin Williams starrer Awakenings, in the way a virtually neglected, near-lifeless entity gets an unprecedented, unexpected new lease on life through a firm believer’s determined defiance.

Yet Moneyball does not come off as derivative, managing instead to look and sound unique in spirit—a low-key yet sturdy celluloid delight. (One glaring, perhaps deliberate inconsistency: the 2008 Lenka hit “The Show” is utilized in two scenes, whereas Moneyball is set in 2002.)

Perhaps the best thing about Moneyball, which is based on the 2003 book by Michael Lewis subtitled “The Art of Winning an Unfair Game,” is its overall implication: that sports is really as much about brains as it is about brawn. – Rappler.com 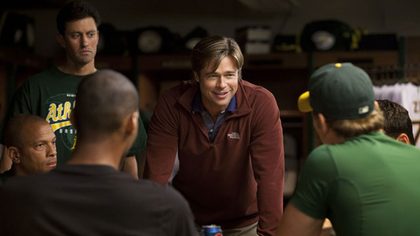 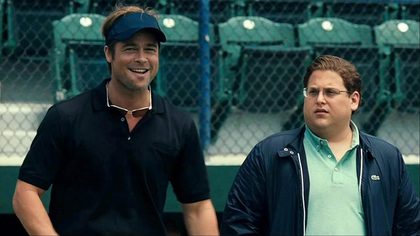