Binge-worthy: ‘She-Ra and the Princesses of Power’ When you think about it, the worlds of Etheria and Eternia — even in the original She-Ra and He-Man cartoons — are interesting case studies for inclusivity.

Just take a look at these crazy characters: you’ve got a henchman whose power is literally his body odor (Stinkor); a furry oaf who probably never made it past kindergarten (Grizzlor), a theater nerd with multiple personality disorder (Man-E-Faces); a so-called “strategist” with extreme self-loathing (Too Bad); not to mention characters who rose above debilitating injuries (Skeletor, Trap Jaw, Mekanek, and many others).

I’m being tongue-in-cheek, of course. But Etheria and Eternia have always been home to a large number of misfits, outcasts, rebels… and whatever the heck this is supposed to be.

And that brings us to the DreamWorks and Netflix reboot She-Ra and the Princesses of Power.  (The plural “princesses” is an important component of the show.) She-Ra isn’t as weird as the original show, but it explores how a disparate group of individuals find themselves, both as individuals and as part of larger causes.(WATCH: The full trailer of ‘She-Ra and the Princesses of Power’ is out)

Produced by Eisner award-winning writer Noelle Stevenson, the new She-Ra is an excellent upgrade of the original show. The original She-Ra and He-Man shows were each produced for binary audiences: She-Ra for girls, He-Man for boys. The new She-Ra does a great job of being even more inclusive. The show is remarkably generous towards audience members of different gender identities… and it does all that while telling one helluva great story. 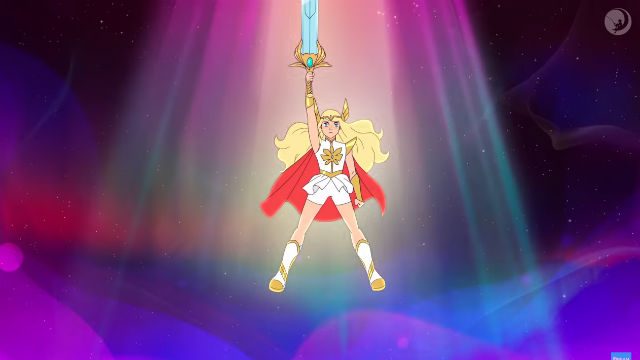 The character design was subject to some early backlash. Most of the criticism targeted the show’s supposed use of the “CalArts” style (which rose to prominence through shows like Steven Universe and ThunderCats Roar). But all the characters in She-Ra are done exceptionally well. The characters are more expressive, making it easy to connect with the characters on a purely visual level. The overall depiction of Etheria also shines here. Castle Bright Moon is a Jugendstil architectural marvel, while the landscapes of Etheria look like they came out of a Moebius art book. 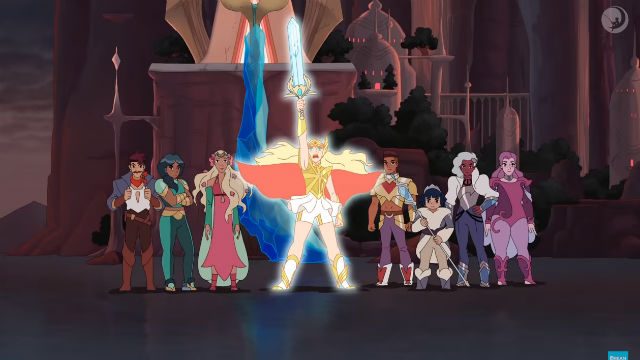 One of the central relationships tackled by the show is that of Adora and Catra, who are at once best friends and rivals. Both were raised and trained by the enigmatic Shadow Weaver to become soldiers in the Evil Horde Army. Shadow Weaver, whose mothering techniques include manipulation and constant head games, has a special fondness for Adora and a particular disdain for Catra. During a jaunt out in the Whispering Forests, Adora falls out of the skiff she and Catra were piloting. Lost in the woods, she eventually finds the Sword of Protection, and forms an instant, if at times terrifying, connection with the weapon. She also runs into Glimmer, princess of Bright Moon, and her friend Bow, who take her captive.

During the trip back to Castle Bright Moon, Adora witnesses the Evil Horde army destroy a harmless village. This leads her to discover two things: that Evil Horde was just that: evil; and that that the Sword of Protection turns her into a freakishly powerful person “with a tiara” during dire moments. After they arrive at Castle Bright Moon, Adora pledges allegiance to the Etherian cause.

She-Ra doesn’t use its lead character as a deux ex machina to resolve conflicts — and is all the better for it. Adora herself doesn’t know how to fully utilize She-Ra’s powers, and she often strains to live up to all the myths and expectations the Etherians have of the legendary hero.

Through the course of the show, She-Ra gets scratched, beaten, cattle-prodded, and infected by a strange technological virus. During these times, Glimmer and Bow often take the lead.

Part of She-Ra’s goal is to unite the various Etherian princesses (namely Perfuma, Entrapta, Mermista, Frosta, as well as honorary princess and Han Solo understudy Sea Hawk) against the Evil Horde. The show goes to great lengths to explore the different idiosyncrasies of these princesses, including their own reasons for not engaging the Horde, be it willful indifference, or a belief that an alliance of princesses would only do more harm than good.

Catra, now a Force Captain in the Evil Horde army, keeps dropping in to undermine the recruitment efforts of She-Ra, Glimmer, and Bow. But the attacks by the Horde Army only convinces the princesses to join the rebellion.

Catra holds a secret jealousy for Adora, and Shadow Weaver uses this to manipulate Catra into tracking down her former best friend. Much like Luke Skywalker’s confrontations with Darth Vader, the scenes with She-Ra and Catra are compelling, because of the hope the protagonist has for her adversary.

This pull between the Etherian cause and her friendship with Catra gives the She-Ra character greater depth than ever before. — Rappler.com 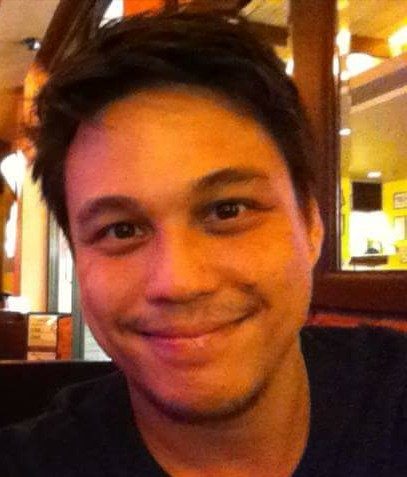