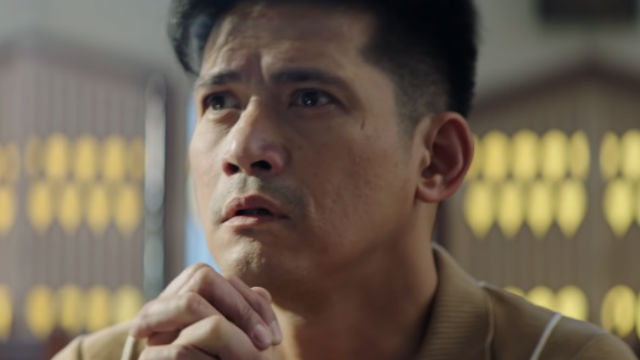 But critics – including prominent names in the film industry – are dumbfounded over the movie’s release but for very different reasons.

Director Lore Reyes, best known for his work with fellow director Peque Gallaga on Magic Temple and Batang X, was one of the first to call on a boycott of the movie.

In a statement to entertainment website Pep, Reyes said: “I stand by my principles and will persist in critizing bad governance, plundering of the national treasury, and the pervading air of injustice, fear and intimidation, and non-accountability.”

“Recently, angry words have been hurled at my person on account of statements I’ve made in public posts on Facebook. Cursing me and calling me names will not change my active political posture,” he said, adding that many of his friends were murdered during the Marcos regime and that they would not betray what they stood for.

Director Carlos Siguion-Reyna and scriptwriter Jerry Gracio also aired their dismay over the movie. Siguion-Reyna mocked Padilla’s assertion that the movie was “just a movie,” and pointed out the timing of its release – months before the 2019 senatorial elections.

“If one makes a biopic about a candidate running in an upcoming midterm senatorial election, and promotes it for release 5 months before said election, a release which may or may not boost that candidate’s ranking to the top twelve in political surveys, do you call that ‘pelikula lang ito, walang politika’? (Do you call that just a movie, there’s no politics?) It is evident that ALL of the above are political acts. Hindi ‘pelikula lang’ (It’s not just a movie). So its makers and promoters shouldn’t wonder how and why it is getting political reactions, including the audience’s decision to see it or skip it. Let the audience decide,” Seguion-Reyna said.

Gracio, who wrote the script for Balangiga: Howling Wilderness and Emir, also took to Facebook to air his thoughts on the matter, recalling the time he was offered to do a script on the life of Imelda Marcos and he was thinking of asking for P1 million.

(There are core values that should not be given up, not just as writers or artists, but also as a human.)

“This is something to be said when filmmakers, artists, and intellectuals become employees and cohorts of fascist politicians and the fascist state.”

Katrina Stuart Santiago, a family member of the late director Ishmael Bernal did not hide her dismay over the Cinema Evaluation Board’s B rating of the movie.

Liway director Kip Oebanda meanwhile tweeted: “Robin Padilla makes a movie about a senatorial candidate and then wonders why people are politicizing it. Amazing.”

Robin Padilla makes a movie about a senatorial candidate and then wonders why people are politicizing it. Amazing.

(Let’s be frank – this movie will be a huge help in propping up my candidacy as senator.)

Dela Rosa, whom President Rodrigo Duterte appointed police chief at the start of his term, spearheaded the launch of the government’s controversial and bloody campaign against illegal drugs. Tens of thousands of deaths – both during police operations and at the hands of vigilantes – have been linked to the “drug war.”

Police themselves have been accused of violating human rights in the name of the anti-drug campaign, an allegation Dela Rosa has vehemently denied. It’s a campaign that’s also been touted as anti-poor, since a bulk of police operations happen in impoverished communities.

Dela Rosa, who retired mid-2018, is now seeking a Senate seat under the administration coalition.

The phenomenon of candidates having biopics – released in theaters or television – is nothing new, however. Candidates in the past have had their lives – or that of their relatives – featured in the long-running anthology drama, Maalaala Mo Kaya.

Pia Cayetano, Grace Poe, and Leni Robredo are among a handful of politicians who had MMK episodes about them or family members leading up to the campaign period.

The Fair Elections Act explicitly states that “No movie, cinematograph or documentary portraying the life or biography of a candidate shall be publicly exhibited in a theater, television station or any public forum during the campaign period.” But this is easily avoidable by having the episode air before the campaign period itself or letting relatives be the subject of the episodes.