WATCH: We’re feeling all the feels after Ariana Grande surprised the TNT Boys 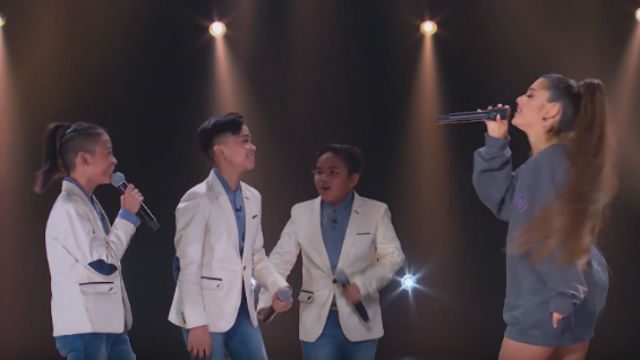 MANILA, Philippines – After a performance that got a standing ovation on The World’s Best, the TNT Boys made an appearance on the James Corden Show on Wednesday, February 20 (Tuesday, February 19).

This time, however, it was the boys themselves who were left speechless thanks to a surprise guest.

The boys – Francis Concepcion, Mackie Empuerto, and Keifer Sanchez – were performing the song “And I Am Telling You I’m Not Going,” when a special guest appeared – no less than Ariana Grande herself.

Although the 3 looked shocked, they continued to sing with Ariana and even got the chance to hug her after their performance.

“You guys are so incredible,” Ariana told them. “That was so beautiful.”

In an Instagram post, the boys wrote: “Is this even real? We sang with [Ariana Grande]! Thank you [James Corden] for making this possible!”

The boys have also appeared on both the US and UK editions of Little Big Shots. – Rappler.com