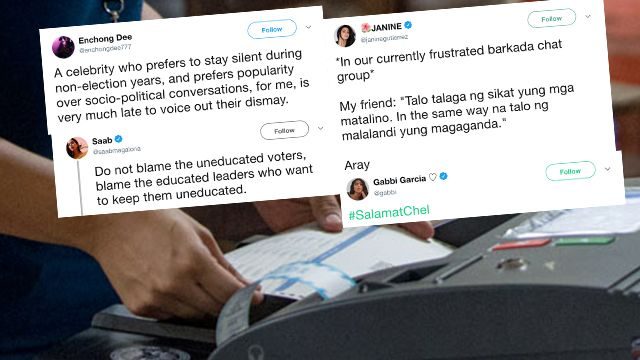 MANILA, Philippines – Ever since the release of the partial, unofficial results of 2019’s local and senatorial elections starting Monday, May 13, many netizens haven’t held back on expressing their candid reactions online. (READ: The ‘long night:’ Filipinos online react to initial 2019 election results)

Among them are a handful of local celebrities, who, after voting, also shared their initial reactions online to the election results. (READ: ‘Disappointed but not surprised:’ Filipinos react to initial election results)

Among them is actor Enchong Dee, who had been praised for using his online platform for a good cause – encouraging his followers to research on candidates before voting wisely. He has also expressed his support for senatorial candidates Chel Diokno, Samira Gutoc, and Neri Colmenares.

After the election results, Enchong spoke up about celebrities who do the opposite of what he does – stay silent. “A celebrity who prefers to stay silent during non-election years, and prefers popularity over socio-political conversations, for me, is very much late to voice out their dismay,” he tweeted.

A celebrity who prefers to stay silent during non-election years, and prefers popularity over socio-political conversations, for me, is very much late to voice out their dismay.

Saab Magalona also took to Twitter to express her disappointment over the post-election “blame game.”

Needless to say (but I’ll tweet it anyway): we obviously don’t stop at blaming.

It's the lies and black propaganda I don't understand. If you don't believe in him don't vote for him. Spreading lies and destroying the reputation of someone with pure intentions is what I don't agree with.

However, she ended on a more positive note.

Congratulations to all the winners of this elections. Some of them I voted for, some I didn’t. From here on, let us all work together to make our country a better one 🙂

Vice Ganda followed suit, stressing the importance of a “democracy” and everyone’s mutual “respect” towards one another’s votes.

TV host Bianca Gonzalez, on the other hand, simply shared her joy over the wins of local bets Vico Sotto, Isko Moreno, and Francis Zamora – the 3 politicians who managed to defeat political giants from the Eusebio and Estrada clans.

Truly happy for the historic wins of Isko Moreno, Francis Zamora, and Vico Sotto! So much young blood taking on mayoral positions this term.

Actress Janine Guiterrez, who shared her support for Chel Diokno and Mar Roxas on Twitter, cheekily said that the the elections played out the same way the “malalandi” win over the “magaganda.”

OMG PILIPINAS YOU'RE BREAKING MY HEART

Sugarfree’s Ebe Dancel was blunt about his feelings.

What an incredibly sad morning

Gabbi Garcia, on the other hand, tweeted a simple but powerful #SalamatChel hashtag.

Director Kip Oebanda tweeted about his bet Neri Colmenares, the return of the oligarchs, and his anger that turned into productivity.

About Neri Colmenares – he knew it wasn't going to be easy. Yet, instead of condescending the voters, he went baranggay to baranggay speaking to ordinary people. He gave space to speak about their issues. Now you have oligarchs in power again and we'l live with the consequences.

He also called on buddy Enchong to share a drink with him.