(It means the news that reached us is not true, yay!)

Rumors that the Song-Song couple’s marriage was on the rocks circulated several months ago, with social media posts pointing out that the two have not been wearing their wedding rings. They tied the knot in 2017, a year after the successful run of their romantic drama, Descendants of the Sun.

Both Joong-ki and Hye-kyo kept their silence amid the speculation and went on with their busy schedules as among Korea’s top celebrities.

Joong-ki was in the thick of filming Netflix’s Arthdal Chronicles while Hye Kyo had her own drama series, Encounter. She was at the 2019 Hong Kong Film Awards in April and flew to New York City for the Prada Fashion Show last May.

For the first time since the divorce rumors surfaced, Joong-ki affectionately spoke about his wife at the press conference for Arthdal Chronicles last May 28. A reporter asked Joong-ki what had changed after he got married and if there were any additional burdens that come after becoming a married man. “I personally don’t think a lot has changed for me after being married. But I actually am a lot more stable at heart,” Joong-ki replied.

“That could be something that’s different and I think anyone who’s married can understand where I am coming from.”

“My wife, she is a huge fan of the (Arthdal) director and the two writers. And because this is a drama series I am coming back with, in about 3 or 4 years, she has been a constant cheerleader for me,” he added.

At the helm of Arthdal Chronicles is acclaimed director Kim Won-seok. The drama, set in ancient times, is written by Kim Young-hyun and Park Sang-yeon.

Asked if he felt any “burden” being in an epic drama, Joong-ki said, “I think it would be a lie to say that I am completely free of burdens.”

He said his fellow stars Jang Dong-gun, Kim Ji-won, and Kim Ok-vin all worked hard on Arthdal Chronicles and were excellent actors, which helped lessen the pressure on him. Joong-ki said his longtime friend, veteran actor Dong-gun, “was a such a pillar of support just by being present on the set.”

“Everyone gave me a sense of confidence. I worked with the two writers and the director before this series, which gave me the greatest assurance,” Joong-ki said. 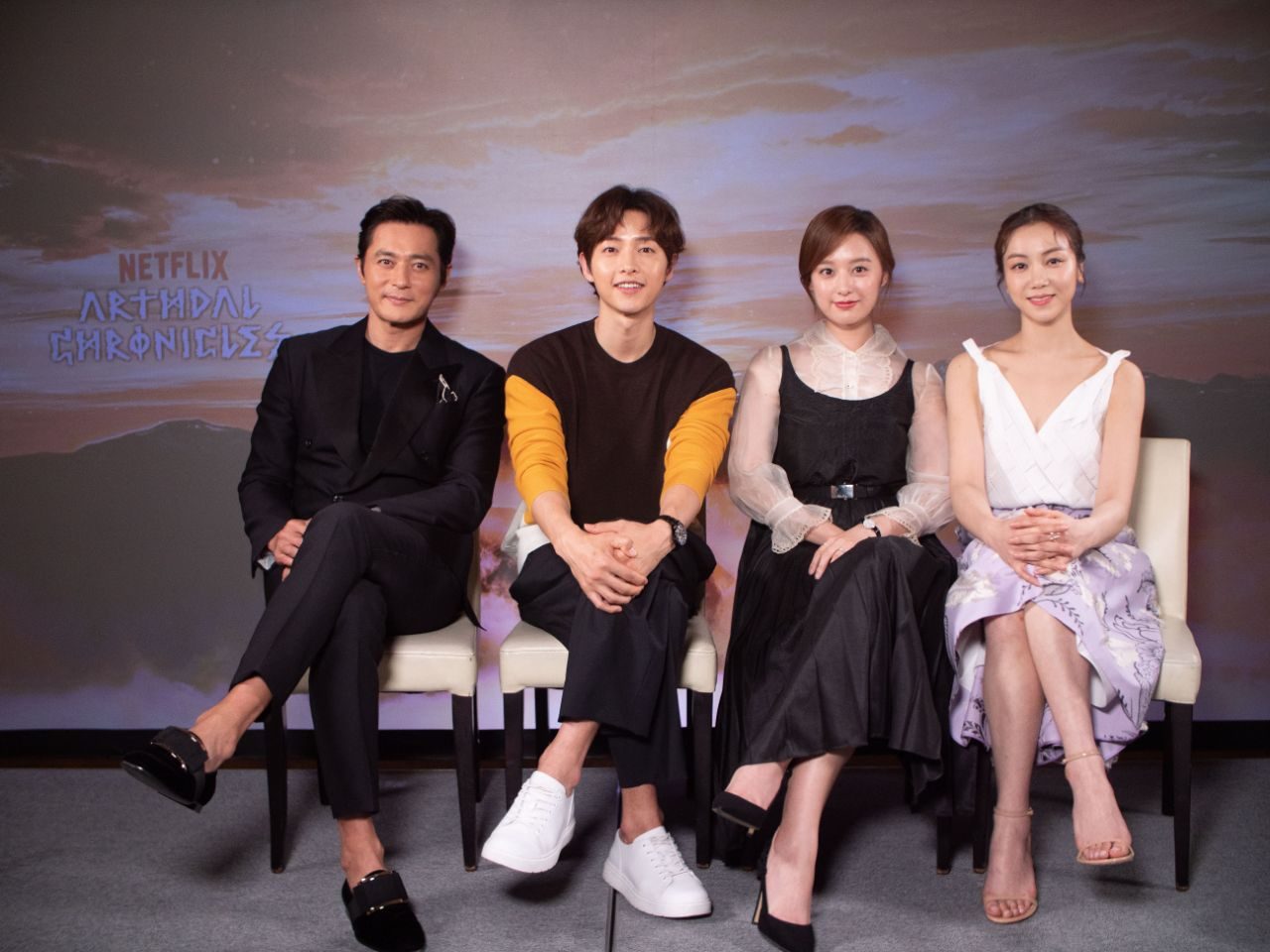 “Having such confidence in the people I work with allowed me to simply focus on acting.”

And of course, he has Song Hye-kyo.

#ArthdalChronicles actor Soong Joong Ki says wife, Song Hye Kyo, "has been a constant cheerleader for me" as he filmed the Netflix series, his first since they got married in 2017 and Descendants of the Sun @rapplerdotcom @NetflixPH pic.twitter.com/P7F0PQuGZm

Arthdal Chronicles starts streaming on Netflix on Saturday, June 1 at 10:30 pm in the Philippines. It will air every Saturday and Sunday. – Rappler.com