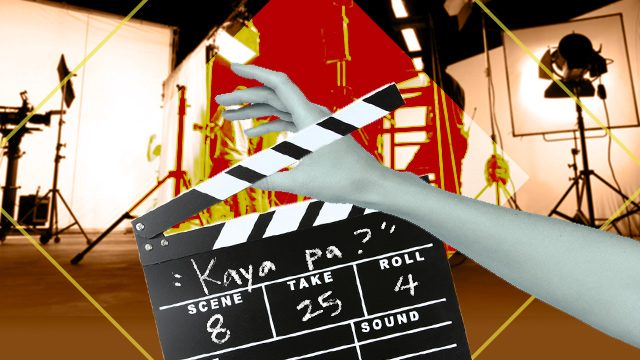 Facebook Twitter Copy URL
Copied
'When did demanding for what’s right become so wrong? Why is fairness something for which we must be punished?'

“Kaya pa?” is a deadly question.

It’s the question thrown around among film and television workers whenever the workday stretches into the wee hours, which isn’t uncommon in this industry. The 2 am pack-up is often considered early despite working since 5 am the previous day. “Overtime” in the corporate world actually means 6 am the next day, at the very least, for us.

It’s alarming, but not new, when someone gets rushed to the hospital out of fatigue.

In less than 2 years of working in the national capital, I have encountered four or five incidents, with noone but a lone, hapless medic on site (or sometimes none at all) and the actors’ drivers rushing them to the hospital through despicable traffic. Actors would force themselves to squeeze the required tears out of their fatigued souls at 3 in the morning (no wonder some TV acting can get absolutely laughable – they’re tired!).

I’ve seen them power through sharp stomach aches because of not eating properly out of insecurities from all the ridiculous beauty standards imposed upon them. The only thing left to do in these conditions then, is to cheer each other on by way of, “Kaya pa?” The only acceptable answer is “Kaya!” because what else can an entire production do? Unforgiving deadlines and limited budgets set by corporations force its workers to keep testing their limits towards dangerous zones.

While “Kaya pa?” seems like a cheery, nonchalant exchange, people have actually died from answering yes to that question over and over.

Directors Francis Pasion and Wen Deramas are only two of the casualties from this deceitfully “harmless” mentality. Only recently, veteran actor Eddie Garcia collapsed on the set of a teleserye and is under observation as of this writing, his family asking for prayers.

There have been other incidents involving lesser known industry workers – extras, stunt people, writers, crew. What is frustrating to me is that the system is so sick, it waits for tragedies involving big industry players before it brings up talk about labor rights and policies. But that’s just it: like any other showbiz bit, after a few weeks and a few long-overdue minor adjustments, the talk dies.

The system, then, surreptitiously crawls back into its old ways while no one’s watching.

That is, until someone has a brush with death or falls through to the afterlife.

In 2016, Labor Secretary Rosalinda Baldoz issued DOLE Labor Advisory No. 04 series of 2016. It states that actual working hours of film and TV workers shall not exceed 8 hours. If more are required, work shall not exceed 12 hours in any 24-hour period.

Veteran actors have noted and welcomed minor changes, such as the implementation of a 2 am cut off time for a number of TV shows. But in my experience, that is not always implemented. Despite this change, the work hours still exceed the 12-hour limit. Many of us may have call times at 6 am and pack up at 2 am the next day. Do the math.

How much harsher, then, are the conditions for the rest of the production, from the directors themselves down to the utilities department? For those who need to spend more hours for pre-production, and who are first in and last out on set?

In cases like these, the Film Development Council of the Philippines did open a National Registry that can provide legal assistance on labor laws and worker benefits. I noticed, however, a pervading fear among actors to complain about unfair labor practices.

To cut the long story short, one may easily find one’s reputation in tabloids (that by the way, have zero knowledge on journalistic ethics) sullied with labels like “diva,” “typical millennial,” or “traitorous ingrate.” Eventually, one’s job offers may dwindle simply because industry outfits prefer the compliant, subservient, unempowered worker-sheep with no cut-off time. Even if there was an actual penalty for transgressions, the pervading culture dictates that productions refrain from hiring empowered workers because they cause problems. This is the very reason why people who play as extras cannot and are unwilling to form unions, or why they refrain from complaining when, in the middle of the hot dry season, they don’t even have an enclosed tent to stay in, keep their belongings secure, or at least be comfortable during waiting hours. They sleep on the pavement, for crying out loud!

For productions, unempowered workers help to keep costs to a minimum. All talents – production, main actors and extras – are paid their daily rates with no overtime pay, but can be made to work the equivalent of 3 continuous work shifts. Locations are used for only a day, removing additional rental costs. So suffice to say, we, the workers, are paying for those amounts which they save.

Other rights are being trampled upon, as well, such as women’s rights. In the sets that I have been in, I have encountered pregnant women slaving away until 4 in the morning, or mothers bringing their children to the set. It’s bad enough for these mothers, how much more for the children? I asked them what happens when they give birth. Their answer: wala, walang sweldo, walang benepisyo.

And don’t get me started on LGBTQ rights and representation. A lot of them are afraid to come out because of the cultural backlash, and while keeping silent gives them jobs, it messes with their well being. Otherwise, they get typecast or not hired at all. Discrimination, and misogyny are huge industry problems too.

What’s worse, newcomers are often told to keep silent, buckle down, get in line and work – to wait for the day when we finally have a name big enough to say something. The quieter you are, the more humble you are deemed as, the more that God Almighty, Son and Holy Spirit are going to bless you, the better your rate of likeability.

But this skewed understanding of humility and hard work doesn’t do much in helping necessary change in the industry. If anything, it is deplorably self-serving, and encourages an individualistic world view that brings out the worst of our tribal tendencies – that the only lives that matter are those in my own village.

In effect, the complaints remain in the grapevine, the most vocal of our lot get the whipping, and no change happens. Too, for many, the higher you go, the bigger the risk of loss. Meanwhile, for those in the lower rungs of the showbiz echelon, they supposedly have yet to earn the right to speak. It’s almost so thankless a job and abusive, many actors would anticipate backlash whenever they start caring about well-being or worker rights.

When did demanding for what’s right become so wrong? Why is fairness something for which we must be punished? Worse, why are we not alarmed? I’m going to quote Jessica Zafra when she said “The excrement has hit the ventilation.” Yes it has, and yet there they still are, sitting pretty.

(At this point I can feel Gordon Ramsay when he says “How is this possible?!” on Hell’s Kitchen. Expletives included.)

In the US, fans of WWE haven been providing help for their stars who need financial or medical help because like the Philippines, these WWE stars do not have benefits, but the corporation earns tons from them. The comedian and commentator John Oliver has spoken about this, and he said that while this help is welcome, we must hold industry players to account – that it is not right for fans to shoulder the accountability that entertainment corporations should have been shouldering. And I agree 100%.

More than it being a systemic problem, it is a cultural one too, a culture that old timers in key industry positions may not be willing to let go of because they benefit from the dangerous risks we lowly workers are forced to make. Sadly, from where I’m sitting, this industry is shaped to honor those who put up and shut up. And for some of us, the price has been unforgivably hefty: life itself.

So, kaya pa? Is it still right that we continue to bend over backwards to maintain these dire working conditions that benefit only a few?

“Kaya pa?” is an open invitation for diabetes, mental health issues, or an untimely heart attack without medical or life insurance from project runners. It is symptomatic of a diseased system that glorifies needless fatalism, unfair labor conditions, and selfish capitalist practices perpetuated by people who sit comfortably in their swivel chairs and air-conditioned offices.

It romanticizes literally dying for one’s passions when what we should be doing is to live for it. It belies the terms of endearment these networks patronize us with – Kapamilya, Kapuso, Kabarkada, ka-whatever. When what it actually means is, like we say in Cebuano, “kamatay.”

“Kaya pa?” is utter disregard manifest. Other people’s greed will be the death of us, and “Kaya pa?” paves the way for that. And by writing this, by God, I am also fighting for my own life. I don’t want to be the next to collapse on set. Neither do I want to care only for myself.

So unless we start being unafraid to demand what is rightfully ours in the eyes of the law, unless we stop labelling each other “diva” whenever someone does so, expect another one to drop dead.

Are we willing to pay that price? Because if you are, then I have all sorts of Cebuano, English and Tagalog expletives for you.