Eddie Garcia sent off with standing ovation at cremation 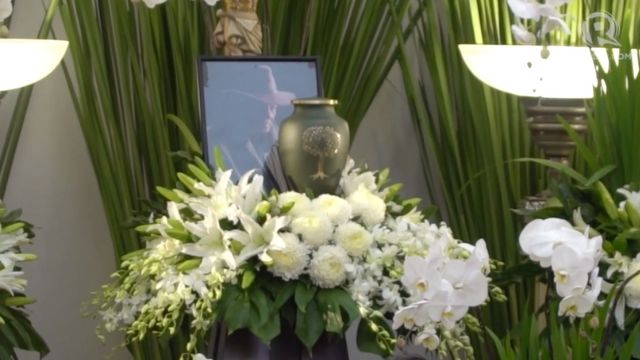 MANILA, Philippines – It was a goodbye fit for a legend.

As his remains were being placed in the crematorium, Eddie Garcia’s family and friends gave him one last standing ovation– a fitting final salute to the actor who even just days before his death was given the Best Actor nod at the Gawad Urian Awards.

Screenwriter and director Bibeth Orteza recalled the moments at Garcia’s cremation, which took place hours after his death at 4:55 pm on Thursday, June 20.

“Ipapasok na siya dun sa mismong crematorium, yung kanyang ano was being wheeled towards it, standing ovation talaga yun,” she told reporters on June 21 at the Heritage Memorial Park where Garcia’s wake is being held.

(He was being placed into the crematorium, his body was being wheeled towards it, there was a standing ovation.)

(It was like a live performance, because all of us who were in the room, we all simultaneously remembered him alive, doing his best.)

Orteza also shared her favorite memories of Garcia, saying that he had always been supportive of her, through both good times and bad, through birthdays and hospital stays.

She said recalled one of her birthdays where Garcia – who is known for his professionalism – had a taping schedule changed so he could attend her birthday.

(I felt so special, you’re an Eddie Garcia.  And only a mere Bibeth Orteza celebrates her birthday and you have your taping schedule changed.)

(Of course, I will never forget when I had my bout with breast cancer, he visited me in the hospital. I was so afraid, because those who visited me were Tito Dolphy, Tito Eddie, and FPJ, so it was like, wow, the kings visited me here.)

Orteza appeared with Garcia in the film Bwakaw, and is a close friend of Garcia’s family.