MANILA, Philippines – Dylan Wang, the 20 year-old actor playing Dao Ming Si in the 2018 remake of series Meteor Garden, was only 3 years old when the original Taiwanese drama-turned-phenomenon aired, such that “his mother was so hooked on the show that she did not have time to cook dinner for the family.”

At the height of the Meteor Garden craze in the early 2000s, its Taiwanese star Jerry Yan was chosen to be the face of a massive Bench campaign. Fast forward to 2019: Dylan, an up-and-coming Chinese actor who has taken on the mantle – so to speak – of Dao Ming Si, joined the local clothing brand’s big-name roster of endorsers.

Prior to meeting his fans at the Araneta Center last July 20, Saturday, Dylan sat down in an intimate gathering with the local press to share a few details about his career, and of course, taking on an iconic role. Comparisons to Jerry Yan, who originated the lead role in the Mandarin-speaking world, are inevitable, but Dylan told reporters through a translator that “he tried not to copy him” even if the Ah Si we have known is “all very the same.”

The actor said he “added his own style and flavor” to the bad boy role, in a way that his interpretation would “represent him and not Jerry Yan.”

The 20 year-old actor had to breathe new life into such an iconic character: a rich, cocky, pineapple-haired troublemaker and 1/4 of a quartet of swoon-worthy college boys – adapted several times by different actors. It was a daunting task for his first lead role, no doubt. While the remake had already concluded its run, it was a laudable effort from the then-rookie, who said he aspires to create a diverse portfolio.

Dylan sees similarities between himself and his Meteor Garden character though, saying that they are both “a bit immature and playful.” “If I could really meet Dao Ming Si in real life, we will definitely be good buddies because I understand you, and I believe that you will understand me, too,” he even wrote on Chinese social media site Weibo, as translated by Twitter user @wanghediarchive.

Now that we’re about halfway through with Meteor Garden 2018, I revisited and translated Dylan’s 180322 weibo post to celebrate the end of filming for MG2018! He talks about his character and himself, and gives us some insight into his interpretation of Dao Ming Si. pic.twitter.com/GGQRG71rmY He continued, as if speaking to his own character: “You probably have no opinion on what I’ve said, after all, I lived in your heart. Don’t worry I’ll move away soon, and look for another character to know and understand.”

“Now, I finally understand how exciting and interesting acting is, even though just half a year ago, I was someone who didn’t know what was a drama filming crew.”

On being an actor, his dream role “Every day is a new day. There is no same thing happening,” said Dylan, when he was asked about what he liked best about working as an actor. He said that he’s glad to meet and deal with different sorts of people in his profession.

The actor also said he doesn’t have a specific dream role to play, but he wants “more unique roles, like, not the usual roles” to add on top of playing drama and romantic comedies.

A former flight attendant before entering showbiz, Wang said he would still like to be one if he hadn’t entered show business.

What’s next for Dylan? Dylan has been cast as the new lead in the upcoming sequel of Chinese fantasy period drama, Ever Night.

He described his role as the protagonist Ning Que as someone who “actually evolves from start to finish,” starting out as a foolhardy young man who “will do anything to protect his family.” 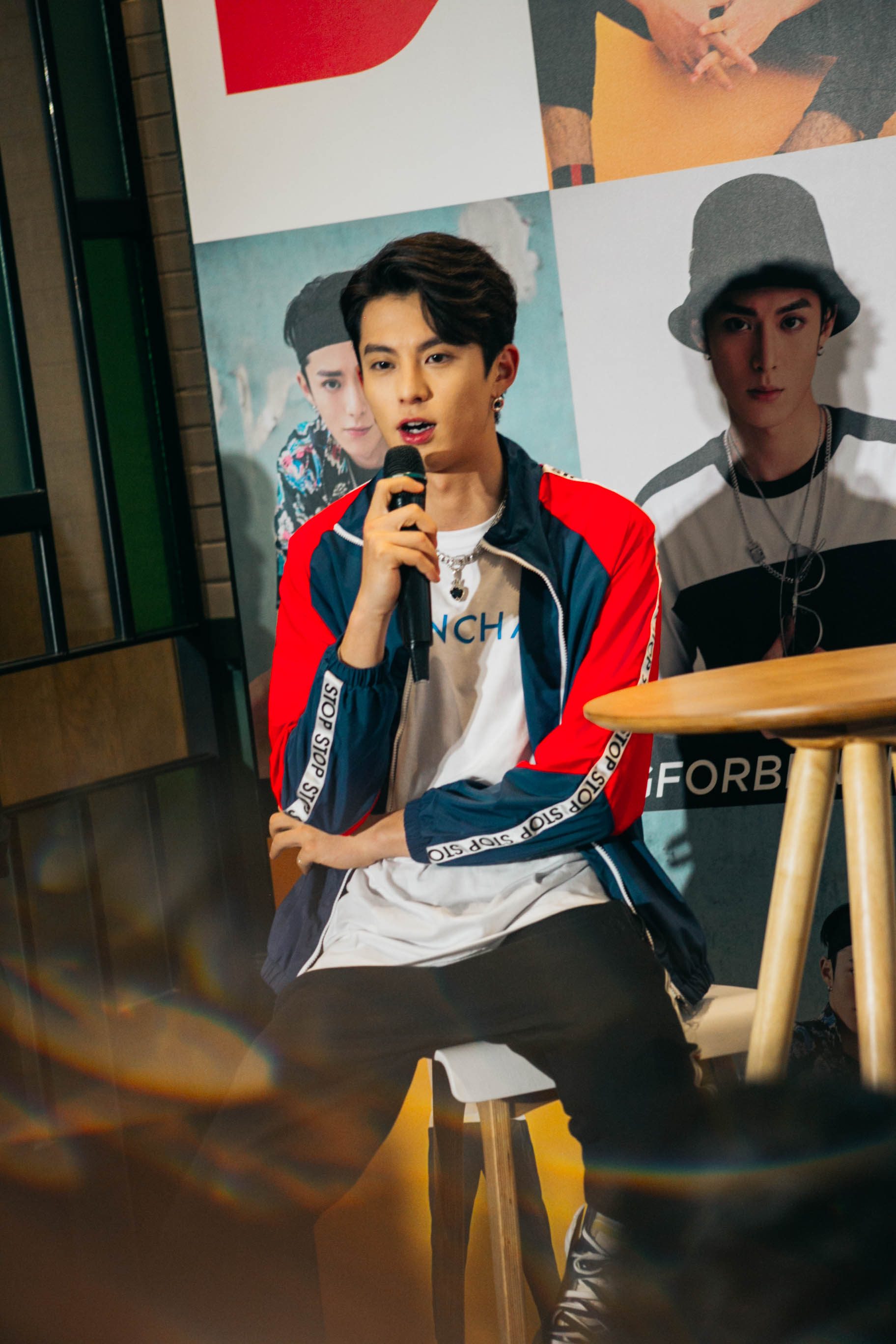 While Dylan admitted that he likes to wear clothes inspired by famous rappers, he said he “just wears whatever he wants and what makes him comfortable.”

Clad in a blue and white tracksuit with a hyped pair of Sacai x Nike Blazer Highs, it’s evident that Bench’s newest global endorser is inclined toward trendy streetwear.

But when asked about his personal style and fashion tips, his answer is nonchalant and instinctive, yet sincere: “Just wear whatever you want, whatever makes you happy.”

On his Filipino fanbase It was Dylan’s first time in the country, and said he was “overwhelmed” and “thankful” when he found out that “he has a lot of supporters here,” considering the limited reach of Chinese social media.

“Just like the weather, the Filipino people are very warm,” he said.

Through his translator, he said that he wants his Filipino fans to know that “he will do his best to portray his future roles in order to make you guys happy.”