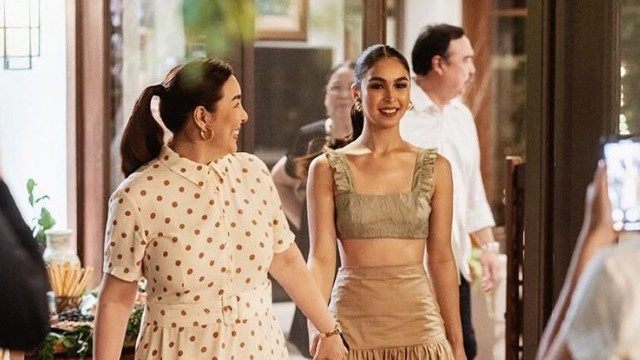 MANILA, Philippines – Marjorie Barretto, mom to top Filipino celebrity Julia Barretto, said she “will” take legal action against an Instagram user who posted a photo of her daughter and fellow actor Gerald Anderson.

“Yes. I will,” said Marjorie on Instagram, answering a person who suggested she take legal action against an Instagram user who posted the photo of 22-year-old Julia and 30-year-old Gerald supposedly taken during fellow actor Rayver Cruz’s birthday party.

“Ikaw yata ang naloko nila (You’ve been fooled). Based on a harmless photo, naging mangaagaw na si Julia? You’re so affected. The person who is circulating that is even hiding under a dummy account. You mean that person has more credibility?” added Marjorie in a separate comment.

She added Julia is “strong” and will be coming out with a statement.

What’s happening? On Sunday, actress Bea Alonzo, Gerald’s girlfriend of several years made cryptic posts on Instagram, alluding to betrayal. While she didn’t say who she was posting about, eagle-eyed fans noticed Bea had liked the Instagram post about Gerald and Julia.

The photo, supposedly taken during the birthday party of actor Rayver Cruz, sparked a social media frenzy Sunday evening, July 22, with some users online concluding that the two Between Maybes actors were more than friends. Gerald, Julia, Bea, and even Joshua Garcia, Julia’s on-screen partner, were trending topics on Twitter. – Rappler.com