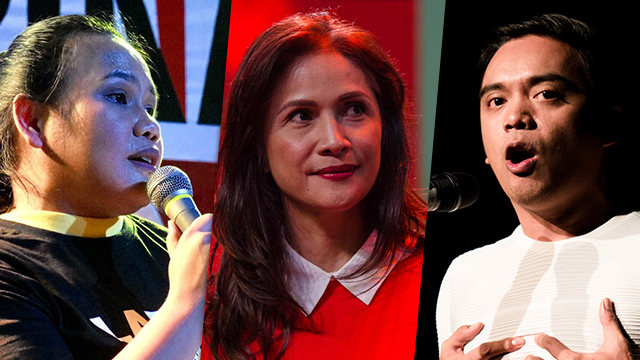 MANILA, Philippines – The Southeast Asian Games 2019 are off to a rough start. After questions over its budget came reports of logistical nightmares for both the foreign and local teams.

Filipino celebrities – a handful of them known critics of the government – took to social media to air their dismay and concert as the regional athletic meet begins in the Philippines.

Singer Bituin Escalante tweeted that she wants the SEA Games to succeed – especially since some of her friends are performing in the opening and closing ceremony.

(So please, Philippine Southeast Asian Games Organizing Committee, do this well. The discrepansies are obvious. Shape up!)

I sincerely want the #SEAGames2019 to succeed as many friends are competing and performing and the success of all , including our organizers, is the country’s.
Kaya please Lang, ayusin niyo yan Phisgoc! Kitang kita ang discrepancies. Umayos kayo!

Actress Agot Isidro hit those saying critics were only out for sabotage. “Stop this nonsense like demolition and sabotage, we did this to ourselves. I say we, because Pilipinas ang taya dito. Lahat tayo,” she said.

No one wants the #SEAGames to fail. What good will that do?

Stop this nonsense like demolition and sabotage, we did this to ourselves. I say we, because Pilipinas ang taya dito. Lahat tayo.

We win as one nga, di ba? And we also fail as one, kapag hindi maayos.

Liway director Kip Oebanda, in a series of tweets, aired his dismay over how the foreign athletes were treated and how some Duterte supporters continue to make excuses for the debacle.

“Excuse me, we aren’t complaining about #SEAGames2019 just bec. we are nega. It’s because 6 Billion pesos was spent on this. OK lang e. But if it’s this bad with that budget it’s incompetence and/or corruption,” he said.

Cayetano, you can hide away your incompetence from Filipinos with your propaganda machine but the rest of SEA is angry or laughing at us for the treatment their athletes are getting. Kung atleta natin 'yan, magagalit rin tayo. Napapahiya ang Pilipinas dahil sa'yo.

Excuse me, we aren't complaining about #SEAGames2019 just bec. we are nega. It's because 6 Billion pesos was spent on this. If we decided a small-scale, cheap event was more appropriate, OK lang e. But if it's this bad with that budget it's incompetence and/or corruption.

Spoken word artist Juan Miguel Severo hit organizers over the apparent delay in the issuance of media IDs and passes.

Concert organizer Happee Sy-Go, who’s brought numerous international acts to the country, tweeted that concert promoters could have helped out in the SEA Games.

Sana for the ASEAN delegates or planning, our government had just tapped all concert promoters to do the job  I’m sure @PULPLiveWorld @mmilive @ovationprod @WilbrosLive would have loved to be part of it &would have done a good job taking care of the athletes  #SEAGames2019

Artists such as Jim Paredes and Leah Navarro, known critics of President Rodrigo Duterte, have been resharing the news of the incidents.

TV host and athlete Gretchen Ho, meanwhile, asked a question even organizers might not have an answer to: “What can we do to save this?”

Both PHISGOC and the Palace have issued apologies over the hitches.  – Rappler.com