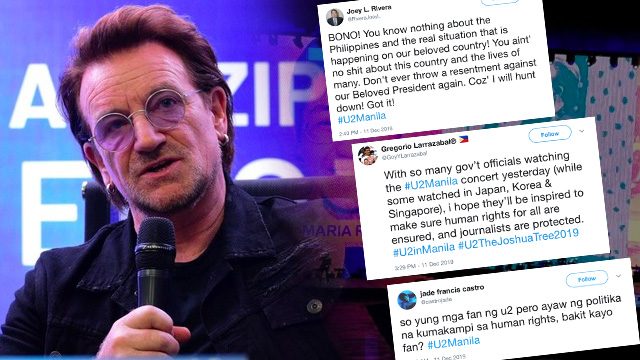 MANILA, Philippines – When lead singer of U2 Bono honored female gamechangers all over the world during their first December 11 Manila concert  – Rappler CEO and executive editor Maria Ressa included – fans reacted online: some were happy, while some were terribly confused.

Many fans were ecstatic to see U2’s social activism present on stage, hoping that U2’s message on protecting human rights and journalists would reach out, especially to the “government officials present during the concert.”

Some, however, were livid on the added politics to a night they believed was supposed to be just about the “music.”

U2 is known for speaking up on social and political issues – both on the stage, and off.

“Women who light up history, your own Maria Ressa, is an incredible woman. But the extraordinary thing is, even Maria will say it’s not about individuals. It’s about collective action. It’s about social movements. And so then all of you can grow up to be the President or Maria Ressa,” Bono said after the performance.

During a press conference in Manila on December 10, Bono also aired out his convictions on journalism, sharing that “the safety of journalists is very important, and I think a democracy requires a free press.” He sent out a “soft message” to President Rodrigo Duterte, saying “you can’t compromise on human rights.” – Rappler.com