IN MEMORIAM 2019: Farewell to the veterans 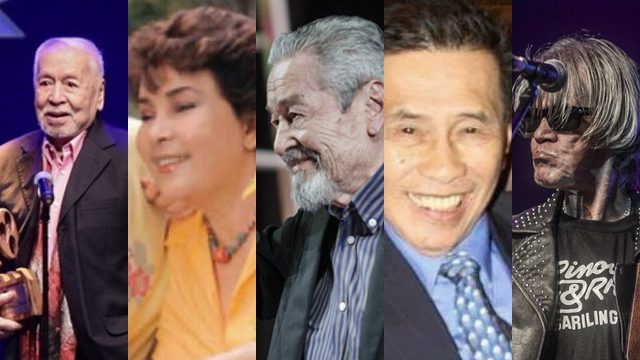 In January, the music industry mourned the death of rock icon Pepe Smith, who died at the age of 71. Smith had suffered a stroke in 2017 and had since reduced his public appearances. (READ: ‘Rakenrol in heaven’: Singers, celebrities mourn Pepe Smith’s death)

Razorback drummer Brian Velasco died at the age of 41.

In February, comedian Bentong died at age of 55. According to his wife Cecille, Bentong passed away due to heart attack.

It was also in February that actress and movie producer Armida Siguion-Reyna, known for her show Aawitan Kita, died at 88.

Radio drama actor August Victa also died in March at the age of 87.

In May, writer Clinton Palanca, considered one of the best writers of his generation, died at the age of 45.

Rodolfo Francisco, known for playing the grandfather in an iconic 90’s McDonalds commercial with Karen delos Reyes, passed away at 96. Rodolfo is also the father of Frontrow co-founder and actor RS Francisco.

In June, screen legend Eddie Garcia bid farewell at 90. The actor was taping for what would have been his TV comeback, Rosang Agimat, when he tripped on a cable and sustained a fracture on his cervical spine. He was rushed to the hospital and died on June 20.

Comedian Gary Lising died at the age of 78.

The pageant industry meanwhile the death of former beauty queen April Love Jordan at the age of 31. She competed in several local pageants, including Miss world Philippines 2012 and Mutya ng Pilipinas.

In July, radio station MOR 101.9 bid farewell to DJ Jasmin Basar, who passed away after battling a kidney condition and undergoing dialysis.

In August, fashion designer Eddie Baddeo died at the age of 57. In 2016, he was diagosed with colorectal cancer. Despite his condition, he continued to work.

Rising child star Sophia Corullo, who first rose to fame on the It’s Showtime‘s segment “Mini Me” died at the age of 6. Her management did not specify the cause of her death, but mentioned that two of her sibling were suffering from a dengue infection.

Sari Yap, who founded Mega Publishing, died on September 9. Sari battled cancer in the last years of her life.

Isah Red, one of the country’s most well known entertainment editors, died in September. He worked for Daily Tribune and the Manila Standard.

Film director Mel Chionglo, known for Midnight Dancers and Burlesk King, died at the age of 73.

Amalia Fuentes, known as the “Elizabeth Taylor of the Philippines,” died at the age of 79 in October.

Veteran actor and theater educator Tony Mabesa, who appeared with Eddie Garcia in the movie Rainbow’s Sunset died at the age of 79.

Mico Palanca died at the age of 41. Mico is known for appearing in shows such as It Might Be You and Kay Tagal Kang Hinintay.

Comic creator Gerry Alanguilan died at the age of 51 on December 21. He was known for the comic Wasted and did some work for Marvel including Wetworks, X-Men, Superman: Birthright, Wolverine, and Fantastic Four. – Rappler.com