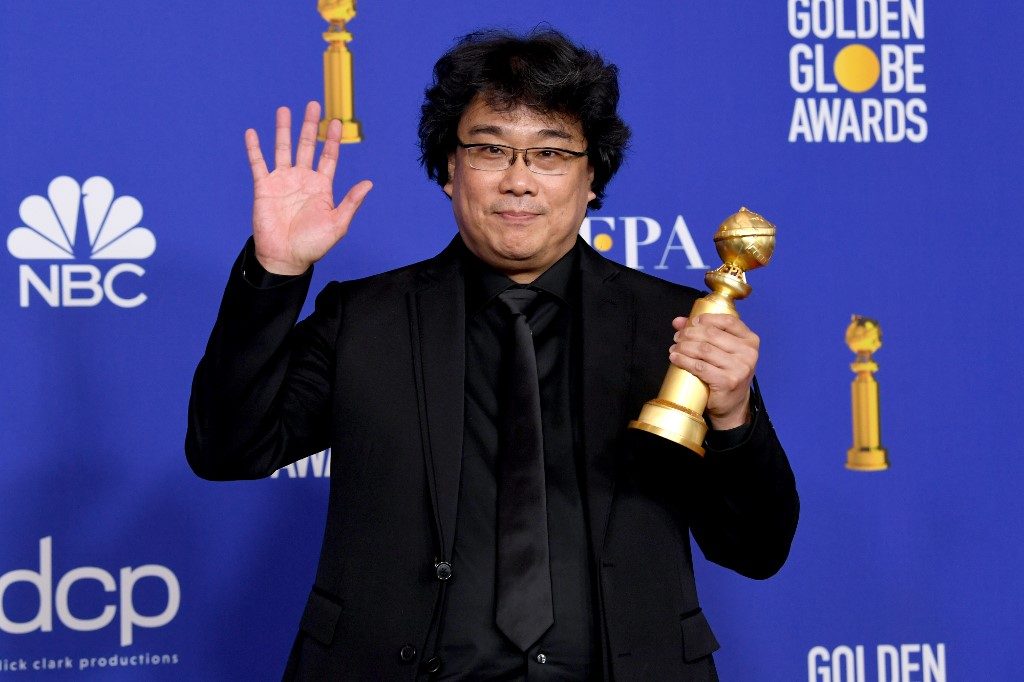 SEOUL, South Korea  (UPDATED) – South Korean filmmaker Bong Joon-ho has been on quite a wild ride this awards season.

That trip reached its climax Sunday, February 9 when he made history with Parasite, the first non-English-language film ever to win a best picture Oscar.

The film, a vicious satire about the widening gap between rich and poor, took home four Academy Awards – for best picture, best director, best original screenplay and best international feature after winning the Palme d’Or at Cannes, a Golden Globe and two Baftas.

“We never write to represent our countries,” said the 50-year-old Bong. “But this is (the) very first Oscar to South Korea. Thank you.”

Later, as he accepted the prize for best international feature, he said in English, eliciting laughs from the audience: “Yeah, I’m ready to drink tonight.”

As the night wore on and Parasite kept collecting awards, Bong was overcome.

“It’s very hard to believe. It’s such a great honor,” he said backstage.

Bong – who is known for his dark and genre-hopping thrillers – already had a series of critical and commercial hits behind him before Parasite and is one of South Korea’s best-known faces.

His triumph on Hollywood’s biggest night should take him to new heights.

The significance of Bong’s win “cannot be underestimated both for Korean cinema and non-English language cinema as a whole,” Jason Bechervaise, a professor at Korea Soongsil Cyber University, told AFP.

“It will obviously go down in the history books.”

Bong grew up in an elite artistic family in Seoul – his maternal grandfather was a renowned novelist while his late father and all of his siblings are university professors in fields including fashion and fine art.

He studied sociology at the South’s prestigious Yonsei University and reportedly took part in street protests while enrolled there during the country’s pro-democracy movement in the 1980s.

Bong once told an interviewer he had been arrested for using petrol bombs.

He was among the first wave of South Korean filmmakers to blossom after the country’s full democratisation, which opened the door for a cultural renaissance.

His Memories of Murder – a 2003 feature film based on real-life serial killings that rattled the nation in the 1980s – was seen as a metaphor for a repressive society under military rule.

Bong’s 2006 monster blockbuster The Host portrayed an incompetent government left helpless in the wake of a disaster. In 2014, parallels were drawn between the film and the Sewol ferry sinking that killed 300, mostly schoolchildren.

His 2013 Snowpiercer depicted a dystopian future in which the last humans on Earth – who survived a failed attempt to stop global warming – travel endlessly on a train separated according to class, and the lower class revolts.

Tilda Swinton, who was in Snowpiercer, also starred in Bong’s Netflix-produced 2017 sci-fi action-adventure Okja about a country girl trying to save a genetically-engineered beast from a greedy multinational firm.

Quentin Tarantino – whose Once Upon a Time… In Hollywood won two Oscars on Sunday – once likened the South Korean to “Steven Spielberg in his prime”.

Bong is “not a filmmaker who has come out of nowhere, he’s been an established director for close to 20 years and has made exceptional films,” Bechervaise told AFP.

“He’s also very charming and sociable. This has been a factor, I think, in how far the film has gone having done hundreds of interviews, possibly more, and mingling with voters and the Hollywood elite.”

Throughout his career, Bong has often tackled dark and difficult subjects including violent crime, systematic oppression and the climate crisis.

He also has candidly spoken about dealing with severe anxiety, in a country where mental health has long been a taboo topic.

“All his films are sociology-in-motion, and all his films have a political subtext,” said Michael Hurt, a sociologist at the University of Seoul.

“They’re all deeply inoculated with socially critical, political thought, without being preachy or obvious about it. Few other directors can do this.” – Rappler.com