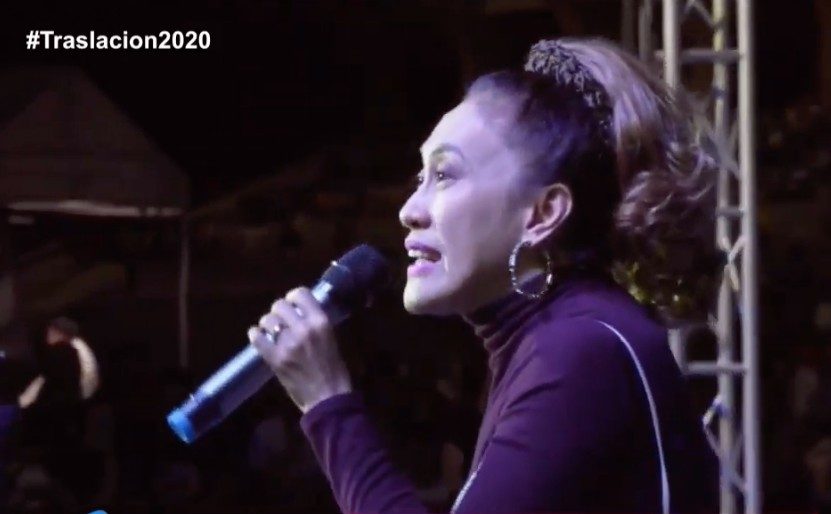 MANILA, Philippines – Actress and comedian Ai-Ai delas Alas dropped by the Quirino Grandstand early Thursday, January 9, after the midnight mass for the feast of the Black Nazarene. She performed and shared with the audience the blessings she received.

Ai-Ai recalled how she  was tested when she was about to be launched in the movie Ang Tanging Ina, which became one of the biggest movies of her career. She said that at that time, all she wanted was for people to watch the movie, having been in showbiz for many years.

But when the movie opened, it rained and there was a typhoon. This led her to question God and herself at that time. But to her surprise, she started receiving congratulatory messages, saying the movie was doing well.

“Kaya po iyon ang nangyari, ‘Ang Tanging Ina’ ay isa sa malakas na pelikula of all time nung 2003. Kaya naniniwala po ako na trust in the Lord with all your heart at lahat po iyan, ay kung ano po ang hinihiling natin sa puso natin, ay ibibigay po ng Panginoon Diyos sa atin sa kanyang oras. (So that’s what happened. Ang Tanging Ina is one of the topgrosser films of all time in 2003. That’s why I believe in trust in the Lord with all your heart and all of that, whatever you ask for in our hearts, God will give it at the right time),” Ai-Ai said.

Ai-Ai is set to star in the movie D’Ninang, directed by GB Sampedro which opens on January 22. – Rappler.com