‘Kinikilig Ako’: LizQuen fans praise tandem in ‘Make It With You’

MANILA, Philippines – Lizquen fans took to social media Monday, January 13, as the tandem’s new show Make It With You premiered on television.

The hashtag #LetsMakeItWithYou trended on Twitter with many of the fans commenting on Liza’s acting as she channeled the different personalities of her character Billy. 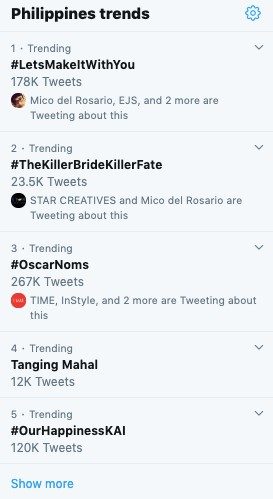 oo, fan ako, pero unbiased to, sobrang galing na artista ni liza. sobra! she's great in a team up, imagine when she really matures as an actress, she will be one of the greats. #LetsMakeItWithYou

Liza Soberano proves that she has already improved a lot as an actress. Very impressive when she manages to be sexy, naughty, silly, embarassing and pretty at the same time. #LetsMakeItWithYou

Only Liza Soberano can do those embarrassing things and still look pretty. The world is so unfair!#LetsMakeItWithYou

This is a very very different Liza!!!! Omg im so so so proud!!! Hi Billy!#LetsMakeItWithYou

Fans also commented on how funny and amusing the piliot episode was while other said they briefly forgot their worries and stress from the events of the past few days.

Because work was suspended, was able to watch "Make it with You." I thought it was a foreign film. @lizasoberano is soooo soo beautiful and her acting here  @itsenriquegil (some scenes) can't help but to see you as TenTen of Dolce Amore  #LetsMakeItWithYou

"Life is not a race, but a journey to be savored each step of the way!." related to my fave quote. #LetsMakeItWithYou yeah u can choose ur own path…& still, God will direct you! https://t.co/pp2oc0DzOj

Set in Croatia, the show tells the story of Billy (Liza) and Gabo (Enrique). Billy takes on odd jobs to make ends meet for her family, while Gabo finds himself wandering the county. Their paths cross when a socialite asks Billy to set her up with Gabo.

Billy tries to help Gabo learn life in Croatia, and the two become close to each other. (READ: How Liza Soberano, Enrique Gil transformed for their roles in ‘Make It With You’)

The show is directed by Cathy Garcia-Molina and Richard Arellano and written by Mark Angos. – Rappler.com