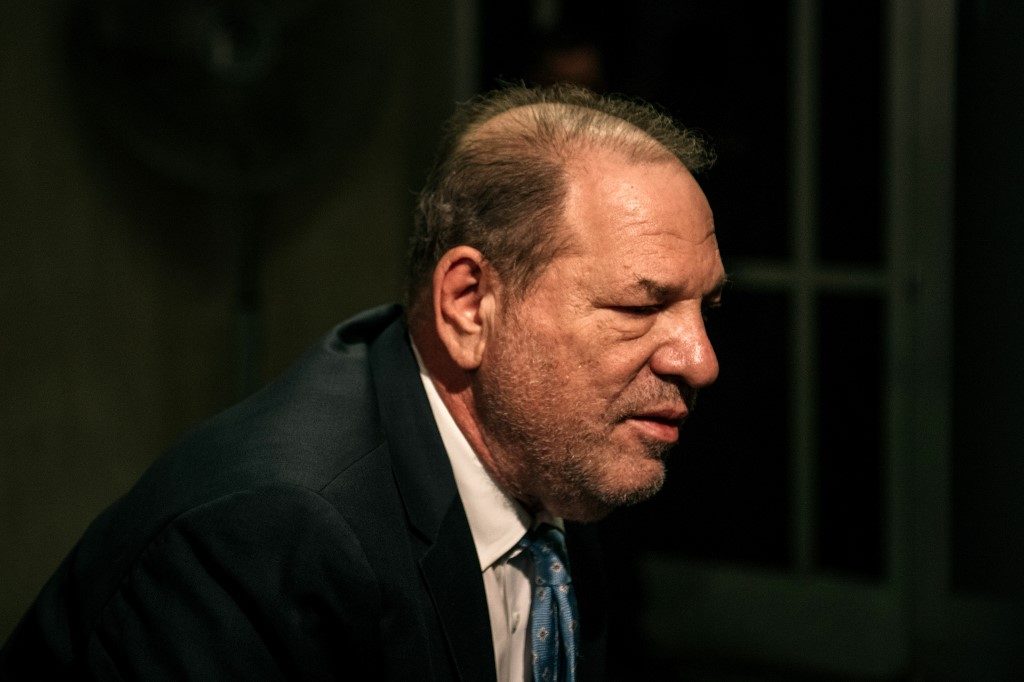 NEW YORK, USA (UPDATED) – Disgraced Hollywood mogul Harvey Weinstein was convicted Monday, February 24, of rape and sexual assault but acquitted of the most serious predatory charges, a verdict hailed as a historic victory by the #MeToo movement against sexual misconduct.

The 67-year-old was remanded in New York’s notorious Rikers Island jail after the jury of 7 men and 5 women found the once powerful Hollywood producer  guilty of criminal sexual acts in the first degree and rape in the third degree.

Oscar-winner Weinstein, whose films included Shakespeare In Love, was found not guilty of first-degree rape and predatory sexual assault, charges that could have seen him jailed for life.

But he faces up to 29 years in prison on the two felony convictions.

The ashen-faced defendant, who attended the trial hunched over a walker, showed little emotion after the verdict was delivered to a packed New York courtroom. He was taken into custody pending sentencing, which was scheduled for March 11.

His lawyer Arthur Aidala said a “shocked” Weinstein was muttering ‘I’m innocent, I’m innocent. How could this happen in America?'”

Lead attorney Donna Rotunno promised an appeal, saying “the fight is not over” and applauded Weinstein for taking the decision “like a man.”

The mixed verdict offered a large measure of vindication for the dozens of women who made allegations against him.

It was the most high-profile sex assault conviction in the United States since Bill Cosby was found guilty in 2018 of drugging and sexually assaulting a woman 15 years prior.

The Time’s Up foundation, formed in the wake of the Weinstein case, celebrated the outcome as marking “a new era of justice.”

“Abusers everywhere and the powerful forces that protect them should be on notice: There’s no going back,” it said in a statement.

Manhattan’s top prosecutor Cyrus Vance praised the women who testified against Weinstein as having changed “the course of history.”

“This is the new landscape for sexual violence survivors. This is a new day,” Vance told reporters outside the New York courthouse.

“We all owe an immense debt to you, who had the courage beyond measure to speak your story to the world, to the courtroom, at great personal risk, and in great personal pain.”

More than 80 women have accused Weinstein of sexual misconduct since allegations against him ignited a global reckoning against men abusing positions of power in October 2017.

But with many claims too old to prosecute, the jury considered charges related to just two: ex-actress Jessica Mann and former production assistant Mimi Haleyi.

The predatory sexual assault charges included testimony from The Sopranos actress Annabella Sciorra, who said Weinstein raped her in her New York apartment in the winter of 1993-94.

Six women took the stand to say they had been sexually assaulted by Weinstein.

They were subjected to ferocious cross-examination as Weinstein’s defense team argued that his relationships were consensual and transactional.

The prosecution cast Weinstein as a conniving predator who demanded sex in exchange for access to the film universe where he reigned, but presented no forensic evidence or third-party witness accounts.

The state’s case instead rested on asking the jury to believe the women.

Ashley Judd, who has said Weinstein destroyed her film career after she rejected his sexual advances, tweeted thanks after the verdict dropped.

“For the women who testified in this case, and walked through traumatic hell, you did a public service to girls and women everywhere, thank you,” she said.

Weinstein, who has always said his sexual relations were consensual, was charged with raping former actress Mann in the DoubleTree hotel in midtown Manhattan in 2013.

He was also charged with forcing oral sex on former production assistant Haleyi at his New York apartment in July 2006 while she was on her period.

The charges of predatory sexual assault, a serious sex crime committed against more than one person, were the most grave and carried a sentence of life in prison.

For the jury to convict Weinstein of that they would have had to believe either Mann or Haleyi plus Sciorra.

Sciorra’s allegation was too old to be prosecuted as an individual crime but she was included in the indictment to bolster the predatory sexual assault charge.

Sciorra said in a statement Monday that her testimony had been “painful but necessary,” according to The Hollywood Reporter.

Ex-model Lauren Young told the court Weinstein sexually assaulted her in the bathroom of a Beverly Hills hotel room in 2013 when she was a 22-year-old aspiring actress.

Eyes now turn to Los Angeles, where Young’s allegations form part of a separate sex crimes investigation against Weinstein being carried out by prosecutors in the California city.

They accuse him of raping an Italian model in February 2013 and of assaulting Young the following night. – Rappler.com