MANILA, Philippines – Ellen Adarna said that she went through “mental training” in Bali, Indonesia, during which she was isolated for a number of days from the outside world.

On her Instagram stories, the actress, who reactivated her public account early this year, said that she underwent the training due to the challenges she went through the last 3 years.

“To everyone asking, I did mental training coz I was stuck in this black hole for almost 3 years. My anti-depressants didn’t do me any good, it made me immobile and numb. I was getting weaker mentally, and emotionally – something had to be done.” Ellen shared that her coach recorded her training, including one session where she meditated for 5 hours, balancing on bricks, and jumping. In one story, her torso was wrapped in plastic. She was also seen cutting Bermuda grass, and had to arranged the grass after.

According to the actress, her trainer recorded everything so she can look back on how she dealt with her “inner demons.”

During the training, she shared she had no contact with people and that she was on a vegetarian diet. 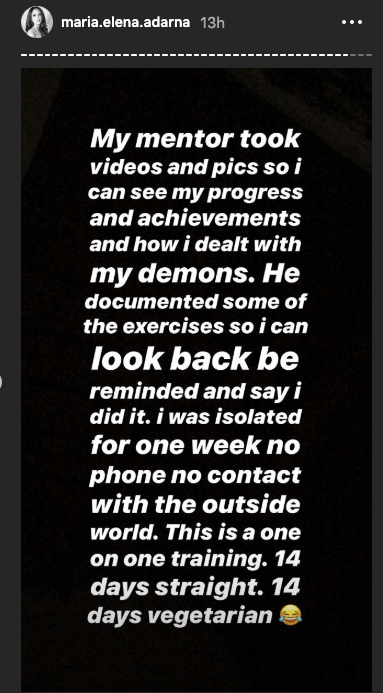 After the training, she was given a certificate of completion from the center she went.

“I can finally say after years of struggling, I am no longer a prisoner in my own mind. Ahhhh freedom, we meet again.”

In 2017, Ellen took a showbiz hiatus after she reportedly was pregnant with John Lloyd Cruz. The two never confirmed their relationship despite sharing a son, Elias. They reportedly broke up last year. – Rappler.com