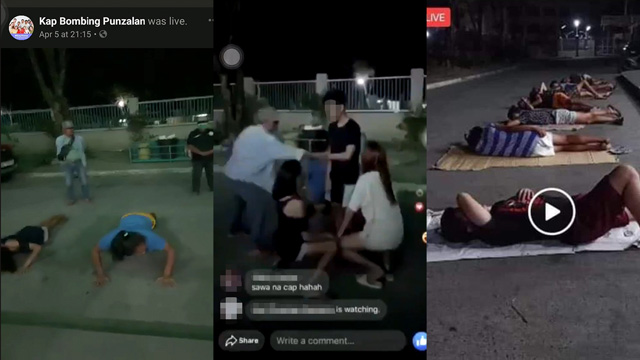 ANGELES, Philippines– As punishment for violating the curfew imposed upon the area, 3 LGBTQ+ people in Pandacaqui, Mexico, Pampanga were ordered to kiss each other and do a sexy dance in front of a minor on Palm Sunday, April 5.

The orders were documented in a Facebook live video from Christopher Bombing Punzalan, the barangay captain of Pandacaqui.

In the video, he could be seen enumerating violators’ names out loud and asking them about their reasons for going out of their homes past 8 pm. Punzalan especially teased LGBTQ+ members in the group, saying they were out at night to look for prostitutes.

With the Luzon lockdown, strict curfews have been enforced across the region to help stop the spread of the coronavirus.

In the video, Punzalan singled out 3 LGBTQ+ people from the violators to do a sexy dance in front of a 15-year old minor who also breached the curfew. There were at least 8 violators taken to the barangay hall.

Among these LGBTQ+ violators were 22-year-old Jesssica Mallari and 20-year-old Shanel Salazar who went out past 8 pm to buy biscuits for their lola from a nearby sari-sari store. Mallari said they were caught by members of the Tau Gamma Fraternity and other barangay volunteers.

27-year-old Elms Almanzor was also among the LGBTQ+ people who were caught for not following the curfew. (READ: [OPINION] Can we beat the coronavirus with ‘discipline’?)

Mallari recounted that she was even asked by their barangay captain to kiss Salazar if she wanted to go home, after being forced to portray videos from the Tiktok app.

(They made us copy moves from Tiktok but we couldn’t do it because they were laughing at us and we were ashamed. He said if we wanted to go home, we would have to kiss. When we didn’t do it, he told us we had to do 20 push-ups. It was past 10pm.)

Other violators received other styles of punishment as well. Mallari said some of the violators were given bond papers, which they had to wet with sweat, while the rest laid on the road until morning.

All of these were filmed through Punzalan’s Facebook live. However, most of these videos have been taken down as of Tuesday, April 7.

Mallari shared they were only able to go home at around 11:30 pm. However, all violators were reminded to come back the next day at 7 am to pick up trash in the barangay. They were threatened to be arrested, paddled and brought to Mexico proper in Pampanga if they won’t appear for the community service.

The 3 LGBTQ+ people, as well as 5 other men, cleaned from 7 am to 10:30 am. While other violators did not comply with the punishment, the barangay officials did not capture them.

(We would like to say sorry for the disobedience. It’s okay to be punished but we cannot accept that it had to be documented live. If we just had to do community services, that would have been okay with us. Since we were caught and punished, we haven’t left the house.)

After snippets of the filmed punishments went viral, Punzalan apologized on Monday, April 6, to the people who underwent different punishments for breaching quarantine protocols.

(I would like to apologize for what happened last night, for those we punished for violating curfew. For those who were offended by what we did to the members of the LGBT, pardon me. We respect the LGBT community… Maybe that happened because of exhaustion from catching violators every night.)

The barangay captain said future violators will be brought to Mexico Municipal Hall so they can record what happened and cases can be filed against them. – Rappler.com

Allena Therese Juguilon is a Rappler mover in Angeles City, Pampanga. She is a graduating Grade 12 student at Holy Family Academy and is the editor in chief of Cor Unum.