How do we watch? Of Netflix and lockdowns (and K-dramas) 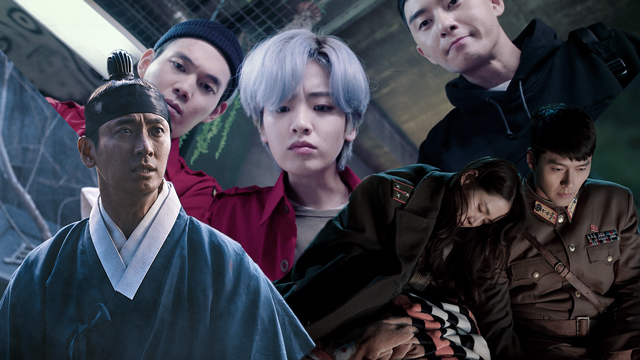 MANILA, Philippines – On March 17, Luzon went on lockdown. Days after, provinces across the country followed as well. With millions of Filipinos at home, people took to the internet to relieve stress and kill time. Upon sampling 50,000 Tweets mentioning “boredom,” “inip,” and “tambay,” it appears that the lockdown sparked much conversation around Netflix.

We then focused our analysis on Netflix and dug deeper into what people have been watching through the lens of Twitter. As it turns out, K-dramas take up most of the conversations on Twitter (as we explain later on in this article).

We filtered Tweets between March 1 and March 31 containing at least one of these keywords: “nood,” “nuod,” “watch,” “tinapos,” “binge,” “Netflix.” Tweets were filtered to the Philippines, and no geo-filters applied. This returned a set of nearly 90 million tweets, from which we sampled 50,000. Our sample was cut down to 42,000 once private tweets were removed.

In each tweet, we looked shows mentioned based on the titles in this list. Because this list was incomplete, we added relevant shows based on the database of other top Netflix PH, American, Korean, and anime shows.

What shows are getting the most attention?
Shows by date, genre, and country

With the strong presence of Korean culture in the Philippines, it’s almost no surprise that Korean dramas took the top 3 spots in the sample.

Between March 1st and 31st, Kingdom received the most number of mentions, tying together elements of historical drama, political warfare, and zombies. Itaewon Class and Crash Landing on You take second and third spots. Elite and Money Heist complete the top 5 shows for March, as shown below.

(The graph has options to filter shows by genre as well!)

Grouping by country, Korean shows received a peak in attention near the weekend before lockdown – almost wholly thanks to Kingdom. As the show’s second season came out on March 13, the buzz around it generated the sharp peak – with two-thirds of K-Drama tweets that day mentioning the show. It seems one season was not enough for Filipino fans, and the response to the season 2 release proved it.

The feels
Shows by topic

We then looked for words associated with specific topics, then matched the shows to the topics, based on the Tweets they appeared in. For example, we looked for Tweets containing “kilig,” “cute,” “kyot,” and “kyut.” and grouped these as the kilig category. Then for a Tweet like “Itaewon Class is so nakakakilig,” Itaewon Class would receive 1 mention for kilig.

While K-dramas may seem to dominate the TV landscape this March, the data shows that Filipino viewing tastes are definitely diverse – as seen under the “Great” and “Binge” categories. It also shows that while attention towards K-dramas is concentrated on a handful of shows, attention on Western shows is spread throughout many different series that Netflix offers.

On the one hand, “kilig” and “ganda” (often referencing female characters) are often associated with K-dramas, a finding echoed in the next section. The “sad” category, on the other hand, sees more Western and anime shows, which also highlights differences between these genres.

What clicks?
Shows by tags

From the initial graphs, the 6 most discussed shows were Kingdom, Itaewon Class, Crash Landing on You, Elite, Money Heist, and Freud. We wanted to find out if any aspect of these shows stood out to people.

We came up with 4 categories: people (characters or appearance), acting, OST (music/songs), and story (plot/story). For each show, we looked at the tweets and picked out which words corresponded to which categories.

With Itaewon Class for example, people included words like “saeroyi”, “parkseojoon”, “yiseo”, acting included words like “acting”, “actor”, “actress”, “emotion”, ost had “sweet night”, “kim taehyung”, and story had “story” and “plot”. Doing this for the 6 shows gave us this plot:

Actors and actresses received a higher proportion of mentions in K-dramas than in Western shows – and with their talent and killer looks, it’s no wonder why K-drama draws in many fans.

Taking a closer look at some fan favorites, we see that Crown Prince Lee Chang, played by actor Ju Ji-hoon, stands out among the Kingdom cast. Park Saeroyi also receives the most mentions for Itaewon Class, while Yoon Seri and Captain Ri share the spotlight among Crash Landing on You fans. K-drama love teams strongly echo themes from our Filipino teleseryes, and they appear to resonate with Filipino fans. 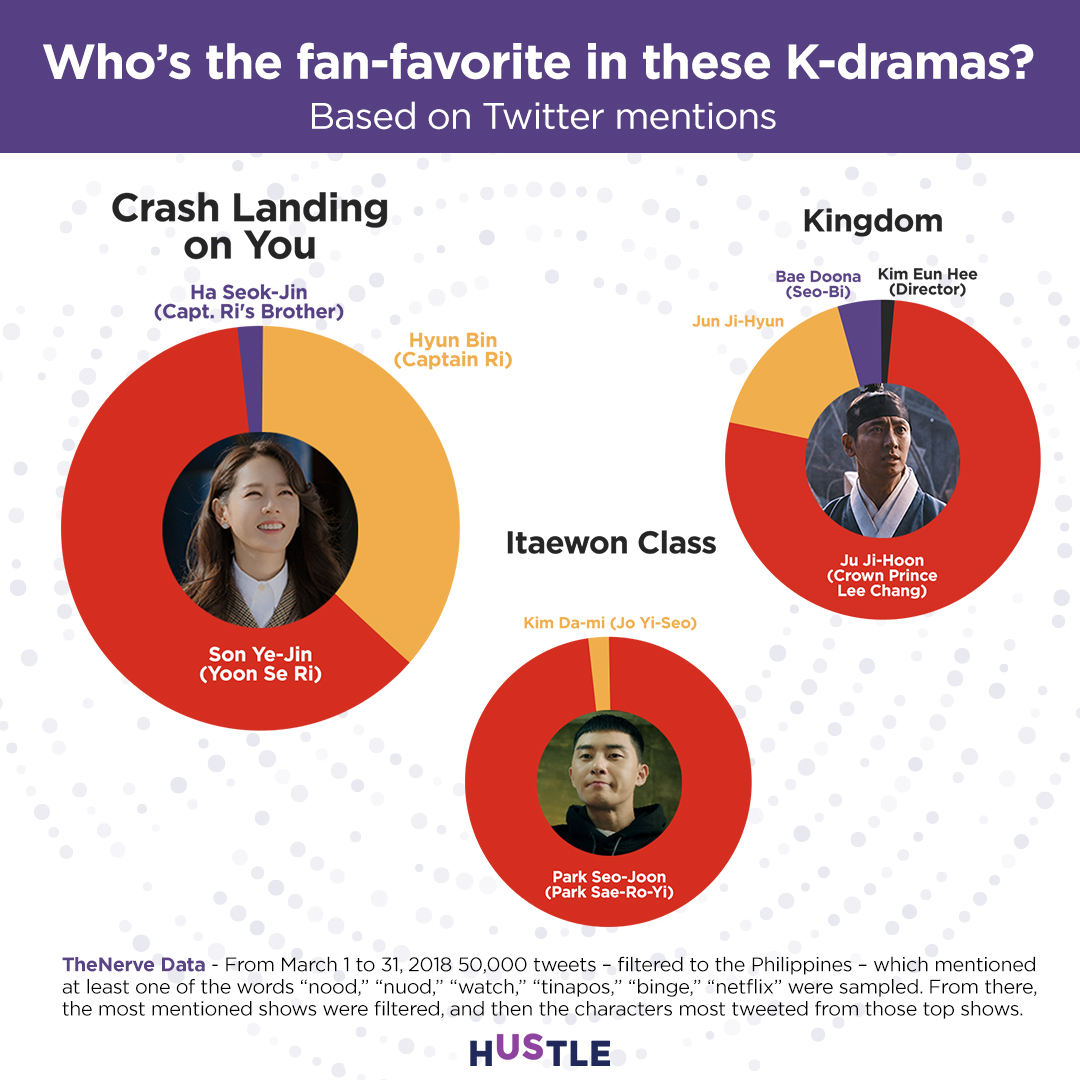 Something of note was how the song “Sweet Night” by BTS member V accounted for nearly half the mentions of Itaewon Class. This goes to show that if you would like to produce a Korean hit show, get BTS (or at least one of the boys of BTS) to sing for you, and the fans will come.

Turning our attention to the group, we can see just the strength of BTS’ following. Among music acts mentioned in the sample, BTS received the highest number of mentions, followed by SB19 and EXO. Already with appearances in the Grammys and on the James Corden show, this single for Itaewon Class is yet another feat for the group, and the data shows it.

The Filipino Twitter universe is rich, and this article has merely provided a high-level overview of what’s going on with regards to Netflix. Surely, there are many other shows and characters not included that you might follow. Leave your Netflix favorites in the comments below! – Rappler.com

Lj Flores is an intern at Rappler and a student at Yale University studying statistics and data science. He enjoys learning new things, indie music, and good coffee.

This story was made in partnership with TheNerve, a Manila-based consultancy that specializes in bringing together valuable data insights and meaningful narratives. Believing that data is key to delivering real-world impact, the company enables its partners across a wide range of sectors to cut through the data clutter and unravel insights to create narratives that matter to their communities.