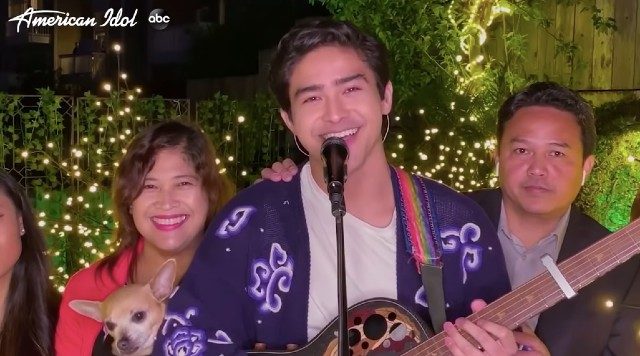 MANILA, Philippines – Filipino-American contestant Francisco Martin ended his journey on the 18th season of American Idol Monday, May 18 (Sunday, May 17 in the US) as part of the Top 5.

Just Sam from New York won the competition, with Arthur Gunn as runner-up.

During the Top 5, Francisco performed two songs – “Alaska” by Maggie Rogers and “Ahh-mazing” by Harry Styles.

After performing “Alaska,” Katy Perry said the performance was an elevated version of audition early this year.

Luke Bryan said: “I’m so proud to see you here. I’m so heartbroken that this is the last time we’ll get to hear you perform like this on American Idol. And I know that sky is the limit for your career.”

Lionel Richie said that Francisco had taken note of all their comments and that he was proud over how he has delivered in his performances.

After the finale, Francisco, 19, took to Instagram, describing his Idol journey as “a ride.”

“I’ve grown so much as a human and as an artist throughout these few past months and I’ll never forget that. I’ve met a great deal of life long friends, unforgettable memories and have gained the support of all you beautiful souls. As a person dealing with anxiety, you’ve all accepted me for who I truly am and have supported me throughout all of it. Jeez I’m just so in love with all of you. To be able to have inspired many of you to follow their dreams is something I never thought would’ve happen in a million years. From the bottom of my heart, wherever you are, thank you so much.”

“This is not the end but only a chapter that has come to a beautiful close. Thank you for riding alongside me on this journey. Hope you’re ready to travel with me onto the next chapter in life. There’s a ton of room, don’t be shy. Grab a seat (if you’d like to). See you soon loves,” he wrote.