“Worth every second of the wait. Most special birthday yet,” he said, sharing a photo of himself and Catriona.

The relationship might have come as a surprise to some, especially since Catriona had said that she and Sam were just friends. But if Sam’s showbiz friends’ reactions are any indication, it’s a love that’s been brewing for a while.

Here’s a look back at their moments together:

A photo of Catriona with her dad and Sam make the rounds online. At the time, Catriona had just been crowned Miss Universe 2018 and was taking a vacation before officially starting her duties.

The photo was picked up by entertainment and gossip websites. Erickson Raymundo, who handles both Sam and Catriona’s careers under Cornerstone, issued a statement, saying the two are acquaintances and attend the same church and bible study group. Erickson also confirmed that the photo was taken at his farm in Tanay, Rizal.

The actor was one of the many Filipinos who congratulated the Filipino-Australian beauty after she bagged the title in Bangkok, Thailand.

“Thank you for raising the flag for all Filipinos @catriona_gray!!! You truly deserve the Congrats!!!”

Some of Sam’s followers commented that the two looked good together.

At that time, Catriona had yet to speak up about the status of her relationship with Clint Bondad.

February 2019: Catriona admits she and Clint Bondad had broken up

Catriona returns to the Philippines for a homecoming. In an interview with Boy Abunda, she confirmed that she was single and that she and Clint had broken up after 6 years together.

She also said that she wanted to be single for the time being.

“I’ve never really had the chance because being in a 6-year relationship from the age of 18, I’ve never been a young adult, especially a young growing Christian also in that season of singleness. And I think it’s really important as an individual because you need to know what you want, who you are to be establishing your identity as your own person. And I just want to take that time. I mean being a Miss Universe for a year is amazing experience and I just want to be able to grow in that kind of season as Miss Universe,” she told Boy Abunda .

In an interview on Tonight With Boy Abunda after her Miss Universe reign ended, Catriona was asked about her love life. In particular, she was asked about two men linked to her at that time – Sam and Alden Richards.

“I feel like the fans are like shipping, which I guess… it’s [what] fans do. I’ve never met Alden before,” she said.

“And then Sam naman, we go to the same church, we are under the same management, so friend naman siya.”

Asked if she was in love, Catriona said: “I am in love with the possibilities of the new chapter.”

During a chat with his friends, actor John Prats and comedian Pooh, Sam got a surprise birthday greeting from Catriona.

“I hope that you have an amazing year ahead. I wish you more birthdays, more happiness. You are loved by so, so many,” she said.

John and Pooh started teasing Sam after they noticed his flustered reaction.

On his birthday, Sam confirmed that he and Catriona are dating. Several of his close friends in showbiz congratulated him, saying he deserves to be happy. Among those who greeted him on his birthday were their manager Erickson, fellow actors KC Concepcion and Angelica Panganiban, and Catriona’s former Miss Universe manager Esther Swan. 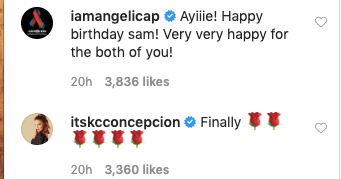 (Finally, a photo where you aren’t the third wheel. Congratulations, @samuelmilby and @catriona_gray. I love you both. May God bless you guys! Cheers!)

The photo showed John holding Sam’s left hand while Sam’s other hand held Catriona’s. The two were also tagged in the photo.

Fans were quick to pick up on the pairing, with an Instagram acocunt – Catsam Official — to boot.

Catriona herself has yet to post about their relationship. – Rappler.com