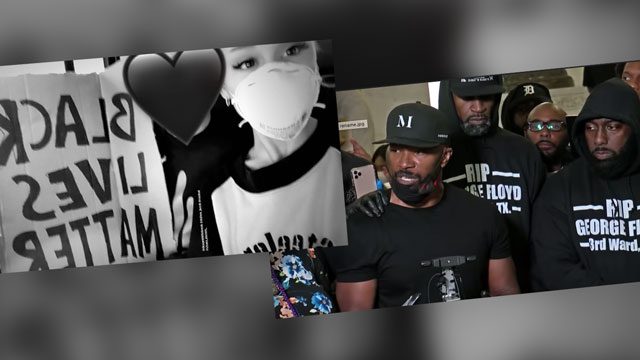 MANILA, Philippines – Some of film, TV, and music’s biggest starts joined Black Lives Matter protests in the US sparked by the death of African-American George Floyd in the hands of Minneapolis police.

Floyd died after a policeman kneeled on his neck for nearly 9 minutes even as he was handcuffed and unarmed. Derek Chauvin, the white policeman, was charged with charged for unintentionally causing a death and negligent manslaughter on Friday, May 29.

The act was captured on video, sparking renewed outrage over the continuing acts of injustice against black people in the United States.

Actor Jamie Foxx was one of the first celebrities to speak out during a protest in Minneapolis.

Jamie Foxx joins social justice advocates in Minneapolis, Minnesota, in solidarity over the death of George Floyd: "All I wanted to do is let you know that we're not afraid to stand…we're not afraid of the moment." https://t.co/elUVBZ8dWy pic.twitter.com/StA6R7mH2u

Nick Cannon also joined a protest in Minneapolis, holding a placard that read “Justice for Floyd.”

Ariana Grande also took to the streets, sharing some photos from a protest in Los Angeles on her Instagram stories. Another photo of Ariana at the #BlackLivesMatter protest in Los Angeles pic.twitter.com/IpeD7QznPp

Actor John Cusack tweeted his experience at a protest in Chicago. The actor said he was hit with a baton.

Cops didn’t like me filming the burning car so they came at me with batons. Hitting my bike.
Ahhm here’s the audio pic.twitter.com/tfaOoVCw5v”

Singer Tinashe shared photos of another protest in Los Angeles.

Black Panther star Michael B Jordan was also spotted in a protest.

In a tweet, the singer said police shot rubber bullets at protesters without provocation. “fired rubber bullets at us. we did not breach the line. hands were up. unmoving. and they gassed and fired,” she tweeted.

I wanted you to know I was SAFE because information was out of control. But I will NOT be updating any more personal information!!!
I WILL ONLY BE DOCUMENTING AND POSTING MY RECORD OF THE STATUS OF THE ASSEMBLY.

Thousands of you witnessed them fire on us unprovoked.
Be safe. https://t.co/G2o5DIV4pb

I wanted you to know I was SAFE because information was out of control. But I will NOT be updating any more personal information!!!
I WILL ONLY BE DOCUMENTING AND POSTING MY RECORD OF THE STATUS OF THE ASSEMBLY.

Thousands of you witnessed them fire on us unprovoked.
Be safe. https://t.co/G2o5DIV4pb

Other celebrities earlier shared their sentiments on social media.

Beyonce posted a video calling for justice for George Floyd. She also asked followers to sign a petition to charge those responsible for his death.

Dwayne ‘The Rock” Johnson, Rihanna, Reese Witherspoon, and Kim Kardashian-West have also expressed their outrage over the George Floyd’s death and repeated instances of racism against the black community.

It was as hard for me to reconcile the difference between what I was taught in church and what I see in the world. I don’t want that for my kids. Or for yours.

I am exhausted by the heartbreak I feel seeing mothers, fathers, sisters, brothers and children suffering because their loved one was murdered or locked away unjustly for being black.