The Muppets is sheer fun, no matter your age

MANILA, Philippines—The Muppets, a late-2011 movie from the studio nicknamed the House of Mouse, is such a joyous piece of entertainment that a review of it filled with nothing but hundreds of smileys would actually do it justice. (Interestingly, like that of Martin Scorsese’s Hugo, The Muppets’ trailer belies the greatness of the full-length movie.)

You might have seen the Muppets on Sesame Street or The Muppet Show back in the ’70s and ’80s (how come the still-running Sesame Street has been off the Philippine air?). You might have seen or still see their Filipinized counterparts in Batibot. You might have sat through any of their flicks from the ’80s and ’90s. You might know them only from the occasional Muppets movie poster at your neighborhood Pancake House. Or you could be too young to have any knowledge of Kermit the Frog, Miss Piggy and the assortment of hand-controlled creatures they call friends.

Whatever your affinity, or lack of it, to these characters, you will most likely enjoy The Muppets because it is, plain and simple, such fun. The new movie does touch on the current obscurity of the Muppets. (For the record, it’s been 12 years since the last Kermit and co. movie, 1999’s Muppets from Space.) This time the gang is shown as having gone their separate ways, little-known to a world that no longer hears words like vaudeville or long-playing records.

But, as with many passé acts of late, a reunion gets called for, only in this case, the Muppets are enticed to get together to save their old studio from total ruin by putting on one more big variety show. More specifically, a nefarious tycoon is out to drill the studio’s lot for potential oil, and this take on corporate greed must have been an interesting tightrope for the filmmakers vis-à-vis this movie’s parent, the Walt Disney Company.

But its plot is actually quite secondary to the main agenda to The Muppets. That is, the movie—essentially the brainchild of co-writer, co-executive producer and lead star Jason “How I Met Your Mother” Segel—is out to restore the kind of entertainment the Muppets did best: cheery with a hint of irreverence, song-heavy with lilting choreography, simply executed yet rather profound in impact.

Of the latter, several examples abound in The Muppets, led by the fact that we are essentially watching sock puppets backed by witty voices, but one scene stands out (small spoiler alert): When the revered Kermit makes his entrance in the movie, he is seen as a night-time silhouette replete with angelic singing and a backlit glow—then the camera reveals a passing bus with bright headlights and a church choir for passengers (end of spoiler). Not only is the scene funny as heck, it also makes the sweet and subtle suggestion that amusement need not come from high-tech means. 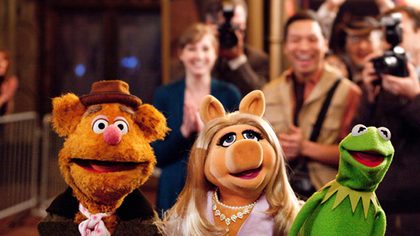 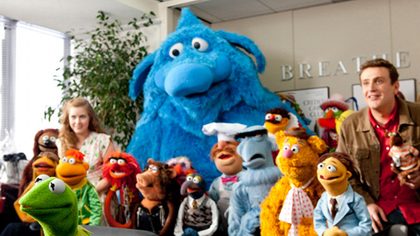 In the midst of the proceedings, The Muppets happily takes nutty, even absurdist jabs at show business—a bit about “travelling by map” is comedic, in-joke genius—while suggesting that meaningful entertainment can truly be timeless. And the fact that tens of celebrities obliged to do cameos here, either portraying fleeting roles or playing themselves, is, I believe, not just a throwback to the old stars-rich Muppet universe but are more so these celebs’ way of acknowledging the unique yet universal appeal of Muppetty delight.

While others beyond the Muppets, Segal and main co-star Amy Adams get credit for making The Muppets a blast, most props are in order for director James Bobin, the Brit director/co-creator of another comedy-musical TV program, Flight of the Conchords. In several instances, The Muppets does harken to that more recent, short-lived TV show, abetted by the fact that this movie’s musical supervisor-composer is Bret McKenzie, who is one-half of the Conchords. (McKenzie got rewarded for his whimsy at last February’s Academy Awards, winning the Best Song Oscar for the climactic number “Man or Muppet”—although my money would have been on another Muppets ditty, “Life’s a Happy Song.”)

Yet, again, knowing next to nothing of the onscreen and offscreen folks who made this flick is no hindrance to enjoying The Muppets. It might even make you exit the theater humming a happy, nonsensical song—a testament to the perpetual fact that we could all use a little silliness amid whatever seriousness there may be. And if you’re of an elder generation, you just might whisper a heaven-bound thank-you to the late Muppets creator, Jim Henson.

That said, be warned: As you watch The Muppets, you just might be consumed with delight and find your head tilted to one side. Consequently, you just might realize that the unadulterated kid inside you has never left the building.—Rappler.com