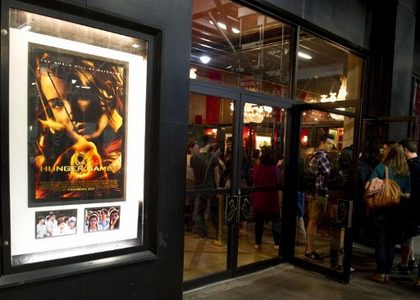 The movie, about one teenage girl’s fight to win a death match reality show in a post-apocalyptic world, enjoyed the biggest ever opening weekend for a non-sequel film, said box office tracker Exhibitor Relations.

Armies of fans had flocked from minutes after midnight Friday to see the movie, based on a book for young adults by Suzanne Collins, in which children compete to the death on live television in a dystopian future.

Estimates Sunday had put its box office earnings at $155 million, but the figure was cut slightly with full takings counted for the movie by Santa Monica-based Lionsgate films.

The picture also scored the third biggest movie opening ever, after last year’s series-climaxing “Harry Potter and the Deathly Hallows – Part 2” ($169 million) and the 2008 Batman movie “The Dark Knight” ($158 million).

In a distant second on the weekend box office were the youthful policemen of 1980s remake “21 Jump Street,” which pulled in $20.5 million on its second weekend in theaters.

The film with underachieving cops Jonah Hill and Channing Tatum, sent on an undercover counternarcotics mission at a high school, had a two-week haul of $70.2 million.

Third was the animated film “Dr. Seuss’ The Lorax” with a $13.2 million weekend haul and $177.4 million in the bank after four weekends on the big screen.

Fourth was the Disney critical flop — and huge loss-maker — “John Carter,” based on books by “Tarzan” author Edgar Rice Burroughs. The film about an ex-Civil War soldier magically transported to Mars earned $5 million.

Disney earlier announced that it expected to lose $200 million on the movie in its second fiscal quarter.