Apr 1, 2012 10:54 AM PHT
Rica Facundo
Facebook Twitter Copy URL
Copied
It was an epic homecoming for the thousands of supporters left spellbound by Alodia 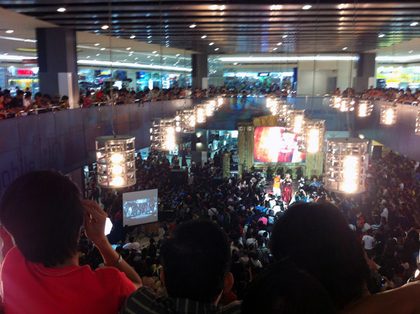 MANILA, Philippines – It was an unlikely family reunion at Alodia Gosienfiao’s Birthday Bash, where a legion of characters came to celebrate, whether decked in layers of battle armor or simply armed with a camera.

Despite the commotion caused by thousands of cosplay and gaming enthusiasts surrounding the stage, on their feet or even sitting on the floor, the SM Cyberzone still felt like a home for a community just doing what they love.

“I was hoping only at least my cosplay, online, and gaming friends would attend. But boy was I wrong!” exclaimed Alodia about the overwhelming turn out of the event, which took barely a month to plan.

“We had so many old faces in the community as well as a lot of new ones,” she said.

From Voltron to international celebrities to plain old supporters in regular jeans and T-shirts, it was an epic homecoming for the thousands of supporters left spellbound by Alodia in the last 9 years.

Because of the growing cosplay industry, the number of attendees who came out to strut their wings, helmets, swords, and hammers, should come as no surprise. But it did, most especially to Alodia.

“There were also a total of 91 cosplayers who registered in the Cosplay Showdown! That’s a lot,” she said.

Due to the massive crowd of fans, Alodia, who was dressed as Lina Inverse, a famous character from DOTA, could not go down the stage and “pick a cute guy in the crowd,” as originally planned.

On the other hand, it was unsurprising to hear the overflowing amount of testimonials, revelations and dedications coming from fans both local and international.

“Mas mahal ko si Alodia kaysa kay Justin Bieber (I love Alodia more than Bieber),” said one fan being interviewed on stage. Bieber has 19,241,006 followers on Twitter while Alodia only has 117,762. 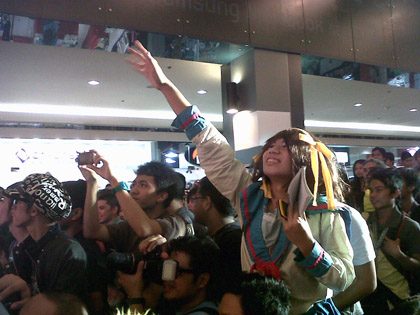 Distance was never a factor for the fans of Alodia who made an effort to give well-wishes and adoration for the cosplay queen.

Danny Choo, a successful Japanese pop culture blogger and also the son of noted fashion designer Jimmy Choo sent a video message, while one fan at the front of the stage flashed a message from his friend in Baguio.

“Well fanboys kami, obvious ba?” said Silver from Segatron, the band which opened the birthday bash. They serenaded the crowd with “Hey, Hey Alodia,” which they wrote especially for her.

Alodia knows how to bring out the best from people. By challenging herself in the various characters she portrays and by competing overseas, she’s paving the way for aspiring present and future cosplayers.

“She’s the girl who opened the mind of the people in the Philippines about what cosplay is and how the cosplayer should be,” said Herbert Chavez, who won the award for Best Male and Best Performer, for his Superman outfit. “This is an opportunity for the cosplayers and gamers to merge. It’s actually a good idea that she threw her birthday party publicly,” said Isabel Cortez who won the award for Best Female, for her Starcraft outfit.

Both Herbert and Isabel have been cosplaying for only 2 years.

But John Andrew De Los Santos, who was the president of Alodia’s first-ever Fanclub in 2003-2004, volunteers what he thinks is what sets Alodia apart from other cosplayers – both locally and internationally.