Apr 19, 2012 9:51 AM PHT
Rappler.com
Facebook Twitter Copy URL
Copied
A week after contestant Jessica Sanchez got eliminated but saved by the American Idol judges, the "tiny girl with the giant voice" came back with a bang 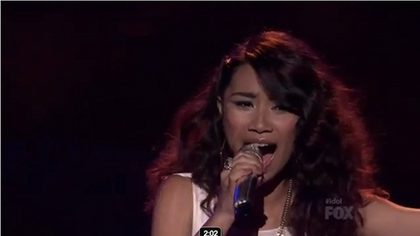 MANILA, Philippines [UPDATED] – A week after singer Jessica Sanchez got eliminated but saved by the American Idol judges, the “tiny girl with the giant voice” came back with a bang — and so did her detractors.

Avid American Idol fans took to social media and blogs, with some comments unfavorable to Sanchez staying in the competition. Others, however, unabashedly shared their admiration with hopes that she makes it to the finals.

In her first song, Fallin’ by Alicia Keys, Sanchez showed off her lethal big voice again.

The judges didn’t give her a standing ovation, but loved it, stressing that their precious once-only “save” vote on Sanchez was worth it.

Jennifer Lopez said, “You’re just a little baby. I’m glad we had a save and used it on you.”

Randy Jackson said, “I hope America shows up and votes for you this week.”

Steven Styler said, “With talent like yours you have a right to get mad at a song.”

For her second set, Sanchez sang Try A Little Tenderness by Otis Redding.

The judges egged her to go beyond showing off her big voice. Lopez noted that “We got a little bit of your alterego, BB Chez,” but Lopez also asked Sanchez to start pushing and connecting with the audience more.

She stressed, “Just the voice is not going to do it.”

Jackson agreed and told Sanchez to focus on connecting with the emotion. “Where you should go is being connected with the lyric.”

Tyler noted that she’s “stepping out” to win people’s hearts. “Bless my soul you’ve done it again. God knows you know you can sing. C’mon girl.”

Only 7 contestants are left in the competition:

She was an early favorite since her rendition of the late Whitney Houston’s I Will Always Love You in the show’s 11th season. She has stumbled with bad song choices, but had wowed the judges, fans, and influential bloggers over and over again.

Being saved by the judges last week was a wake up call to her admirers not to be complacent with casting their votes. A potential flip side for that dramatic “save,” however, is that it would trigger American voters to resent her, putting her chances to stay longer in the competition in peril.

This week, more negative comments against Sanchez surfaced in different social networking sites. Haters voiced out their opinions against the judges’ supposed showcase of ‘favoritism’ towards the young singer.

They also commented on Sanchez’ performance, pointing out her tendency to “scream through her songs.”

‏ @adam_bryant posted this tweet: “Hey Jessica Sanchez: How about YOU try a little tenderness. She screamed that whole song.

But Sanchez’s supporters, especially Filipino groups, were not to be outdone. Vowing not to allow Sanchez to have the lowest votes again, Filipino groups have started different efforts to support Sanchez.

Migrant Heritage Commission (MHC) in Washington, for example, have been sending emails campaigning for those in the US to cast as many votes for the singer.

Others, including former American Idol contestants, have been tweeting asking for support and votes.

@TeamThiaMegia, the Twitter handle of the fan club of This Megia, a previous American Idol contestant who also has Filipino roots, posted this reminder: “U need to VOTE for 2 hours; NEVER ASSUME Jessica Sanchez is safe and stop voting after 15 minutes; KEEP VOTING #TeamJay#BluJays”

Sanchez’s Fans in the Philippines have tried to cast votes through Magic Jack and Skype.

The Magic Jack is a device connected to the computer to be able to place calls to the US for free through the internet. The jack uses a local US number to make the calls thus fooling the system to believe that you are located in America.

These, however, didn’t sit well with other fans who felt that votes for the contestants should be limited to those based in the US.

@VaughnMorales said on Twitter, “Do you want to win by cheating? Or do you want to lose by being cheated on? #NoToCheating #MagicJack #Americanidol@AmericanIdol”

Votes casted are counted if they are via toll-free AT&T numbers registered within the Continental US, Hawaii, Alaska, Puerto Rico, and the US Virgin Islands.

Netizens were quick to tweet about Jessica’s performance, with “Jessica Sanchez” and “Try a Little Tenderness” trending briefly worldwide in the hour after the show, only to be replaced by each contestant’s name.

In the Philippines, the phrases “Try a Little Tenderness”, “Alicia Keys”, “#USVote4JessicaSanchez” also made it on the trending list.

Jessica herself has noticed the trends and found time to quickly tweet after the show.