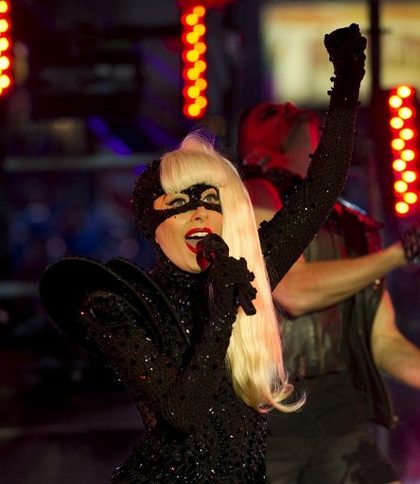 The pop diva arrived in South Korea on Friday, a week before her Seoul performance which kicks off her “Born This Way Ball Global Tour.”

About 300 Protestant church members will gather in downtown Seoul Sunday night to hold a group prayer against the concert in the capital, Kang Ju-Hyun, a prayer organizer told AFP.

“We will pray to God that the concert will not be realized so that homosexuality and pornography will not spread around the country,” he said.

Kang, who leads a group called Alliance for Sound Culture In Sexuality, said other major church groups would join his campaign by holding protests around the Seoul headquarters of Hyundai Card, the concert organizer.

The Korean Association of Church Communication vowed last month to take “concerted action to stop young people from being infected with homosexuality and pornography.”

Kang’s group last week put out street banners in Seoul accusing the eccentric singer of “spreading unhealthy sexual culture” through “lewd lyrics and performances,” before they were removed by the city officials.

South Koreans aged under 18 have been banned from the much-anticipated concert after it was rated unsuitable for younger audiences.

The show had an initial age rating of 12 and older but the Korea Media Rating Board — a state watchdog — adjusted it upwards.

Lady Gaga, whose real name is Stefani Joanne Angelina Germanotta, is famous for the hit songs “Bad Romance” and “Poker Face,” and has become a strident voice for gay rights and anti-bullying campaigns.

From the April 27 concert at Seoul’s Olympic Stadium, Lady Gaga will take her hits and extravagant costumes to Asian venues including Hong Kong, Japan, Taiwan and the Philippines, and then on to 21 European cities.

The singer is expected to do 110 shows this year following up the success of her album “Born This Way”, which has sold nearly six million copies worldwide since it was released in May 2011.

The star, who has a record number of almost 22 million followers on Twitter, told fans that she would “perform the tour of your life” on her Twitter posting on Sunday.

South Korea has East Asia’s largest Christian community after the Philippines, with about 8.6 million Protestants and 5.1 million Catholics. About 10 million South Koreans are Buddhists. – Agence France-Presse