Apr 24, 2012 9:26 AM PHT
Rappler.com
Facebook Twitter Copy URL
Copied
Taking off from the success of Street Dance 3D, this time, it's hiphop and salsa combined. 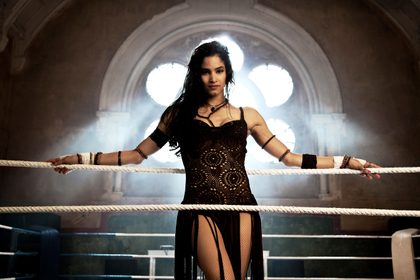 MANILA, Philippines – Hiphop meets salsa. This is is what Street Dance 2 is all about.

Following the unexpected success of Street Dance 3D in 2010 (earnings in the UK box office were a staggering 11 million Pounds), the team behind the project decided to overcome intimidation and do a bigger, better follow-up.

Dance around the world

Street Dance 2 tells the story of Ash (Falk Hentshel) who sets off to gather the best dancers in Europe, to form a group that would compete in the Street Dance World Competition. Accompanied by his newfound friend Eddie (George Sampson), he goes from London to Rome, Ibiza to Berlin, and Amsterdam to Paris. In the process, Ash discovers the magic and power of street dance and Latin combined, and falls in love with a beautiful salsa dancer, Eva (Sofia Boutella), as they prepare for the ultimate global dance off.

Producer James Richardson describes the process of making the sequel as “really organic.”

“We sat down and asked ourselves what made Street Dance 3D … and we all agreed that it was this fusion of dance styles,” he says.

Street Dance 3D combined ballet and hiphop. This time around, James says the fusion of street dance and Latin came about when director Dania Pasquini sent him a clip of people doing salsa in a boxing ring. “Salsa to me was ballroom dancing and long sequined dresses … but these guys had their tops off and the girls were looking incredibly cool. They were doing a kind of battle between them,” he recalls. “I thought, that’s it; this is totally what we have to do!”

Leading man Falk Hentschel (Arrested Development, Knight and Day) readily got excited  about the prospect of dancing as a couple, not usually associated with hiphop.

“I think hiphop is still scared of sensuality and passion between one another, it’s more about power and assertiveness,” he says. “So to take that element of touching each other while you dance hiphop and focusing on somebody else, that part of it really intrigued me.”

Co-director Max Giwa says Flak was chosen for the lead role because “he had the complete package. He has a Latin background, which is something that’s very hard to find. A dancer who does hiphop, a bit of Latin and can act.” Soufia, meanwhile, known as the “Nile Girl” of Nike Women, has gone on world tours with Madonna. “She (Madonna) taught me to start every day with a workout,” she says.

Having taken acting classes in LA for a couple of years now, Soufia says that playing the role of Eva challenged her own ideas on dance. She had never danced tango and salsa and only had 3 months before the shoot to learn them.

“In many ways I felt like Ash. I just wanted to do my own thing, but I learned that you can’t do that with these dances, you have to pay attention to what your partner is doing and move with them,” she admits. Having been told off by the choreographers in the process of shooting the movie, Soufia eventually realized their similarity with her character, Eva. “I understood they were teaching me about the dance, which is what Eva does for Ash.”

Britain’s Got Talent grand winner, George Sampson, reprises his role as Eddie from the first movie. “The audience can identify with him, as well as with his character, so they’ll like to see where he goes and what he gets up to,” says co-director Giwa.

“I was really pleased with the connection between Eddie and Ash because I think it eases the script away from being a full-on love story or a full-blown dance film,” George says about his role. “It’s created a good mid point and I think people will get that.” Watch out for the breathtaking dance acts put together for a whole year (combined with traveling) by renowned choreographers Richard and Anthony Taluega, otherwise known as Rich and Tone, who had worked with no less than Michael Jackson. Latin choreography was taught by Maykel Fonts, winner of Best Choreography and Best Dancer of Salsa at the 2006 Rome Salsa Congress. Sharna Burgess, who has participated in World Youth Latin and Ballroom Championships, was also part of the team. The filmmakers are aware that their audience are a little older now, their lives have changed and matured, so they made the film “a little bit more adult without losing its silliness and fun.”  Street Dance 2 opens May 9. – Rappler.com