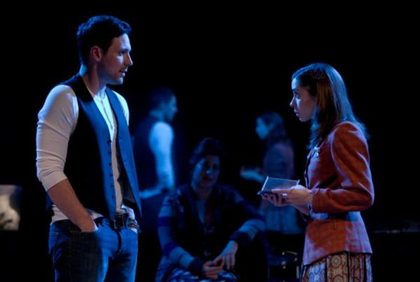 MANILA, Philippines – Nominees for the 66th annual Tony Awards, one of the major awards in the world of theater, were announced on Tuesday, May 1.

Leading the pack is the love story “Once,” a musical based on the Oscar-winning film of the same title, with 11 nominations, including one for best musical.

“Once” tells the story of an Irish musician and a Czech immigrant “drawn together by their shared love of music,” according to the musical’s official website.

The musicals “The Gershwins’ Porgy and Bess” and “Nice Work If You Can Get It,” meanwhile, have 10 nominations each; the play “Peter and the Starcatcher” meanwhile has 9.

This year, 30 out of 37 eligible Broadway shows had at least one nomination, which the New York Times noted a “greater spread” compared to previous Tony nominations. For example, last year, the musical comedy “The Book Of Mormon” had 14 nominations, eventually winning 9.

However, there were notable absences in the nominees’ list: the multimillion-dollar “Spider-Man: Turn Off The Dark” only had 2 nods, while some bold-face names such as Angela Lansbury, Samuel L. Jackson, Ricky Martin, Matthew Broderick, Bernadette Peters, and even Bono and the Edge of U2 are out of the race.

Formally known as the Antoinette Perry Award for Excellence in Theatre, the awards are given to outstanding Broadway performances and productions since 1947. It is administered by the Tony Awards Productions, a joint venture of The Broadway League and the American Theatre Wing.

The awards ceremonies will be on June 10 at the Beacon Theater in New York City, with Neil Patrick Harris hosting for a third time.

The list of nominees for the major categories are here:

Best Revival of a Play

Best Revival of a Musical

Best Book of a Musical

Best Original Score (Music and/or Lyrics) Written for the Theatre