Street Dance 2: The irony of too much dancing

May 4, 2012 9:04 PM PHT
Purple S. Romero
Facebook Twitter Copy URL
Copied
The follow-up did not exactly live up to fans' expectations after a great first film 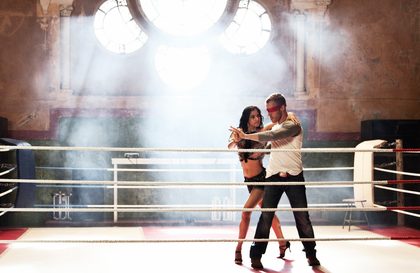 While both have exemplary choreography, showing a tapestry of sick moves from one scene to the other, the first StreetDance movie gave viewers a reason to enjoy the film beyond the dancing.

Both movies worked on the familiar premise of letting people that have different styles in dancing find harmony not only in their craft, but also in their dreams and lives; a plot used before in Save the Last Dance and Step Up.

Street Dance 1 and 2 lent the subject a formulaic approach: there was the underdog, the common themes of betrayal and redemption, unexpected love. The difference between the two however, is that Street Dance 2 did not even attempt to work around the cliches, hence failing to incite real empathy for the protagonist — American b-boy dancer Ash (Falk Hentschel) and his crew — who wanted to defeat the perennial favorite street dance group “Invincible” for the title of Europe’s best dance crew.

On the contrary, the first Street Dance film (shown in 2010) had an emotional hook, because the treatment of the characters was not one-dimensional. There was a natural progression from conflict to triumph. The movie knew when to hold back, take a break from the dancing, and focus on the emotions and thoughts of the characters. The film allowed the audience to see who Carly (Nichola Burley) was — she was the girl whose calling “was beyond making sandwiches,” a reluctant leader, a good friend, a girl who had her heart broken — all of which made her a dancer with depth.

There was also development in Ash’s character, but it was shown in a lopsided way. Ash was a “popcorn boy” (which means he sells popcorn, embodying the poor-but-talented storyline) something that almost never fails to please the filmgoers. The problem was the film ignored this aspect after the first 5 minutes and then just touched on this again at the latter part, when they were about to face Invincible on the dance arena. This could have been a good juxtaposition of his and his opponents’ fates, a showcase of how things have finally gone Ash’s way, but because there was no strong buildup to this transformation, the scene failed to maximize the meaning of this change.

Worse can be said about Ash’s crew members, who were treated as mere caricatures of what they supposedly represent: dancers with different backgrounds, strengths and issues. One of his crew members, Eddie (George Sampson), was an original character from the first Street Dance movie, but it was never revealed how he himself evolved, how he reached point A to point B. In the first installment, he worked in the same restaurant as Carly and was an aspiring b-boy. In Street Dance 2, he suddenly became a manager of a crew. No one is saying it’s impossible for him to get there; the audience however, deserved to at least to know how, especially for the fans of Street Dance 1.

The biggest misgiving of the film is it did not allow the other crew members to tell their stories. In Street Dance 1 (and in Step Up 3), while the spotlight was expectedly not always on the other members of the group, the movies still established why they shared the same struggle as that of the protagonist. Street Dance 2, on the other hand, was just a dizzying disarray of dance; it was one show of flashy dance moves from the other that it hardly had any moments to display just genuine human vicissitude.

There were a few instances that did capture this though, and these scenes were almost all between Ash and the wonderful Latin dancer, Eva (Sofia Boutella). Sofia taught Ash that dancing is not a selfish act, nor something you do to just avenge a bruised ego. “It is not about them,” Eva said, referring to the crowds, or the competitors. It is about dancing, period.

What gave the movie a genuine emotional connection is the character of Manu (Tom Conti), Eva’s uncle. Albeit a supporting role, Manu effortessly showed why he is the perfect link and adviser to the crew. Charming, funny, and charismatic, Manu taught Ash and Eva why trust is essential to loving dance … and each other.

Overall, Street Dance 2 did not lack good moves; there was just too much of it, that it looked like a heavy, noisy music video on replay, not a film about the art of dancing, nor its heart. – Rappler.com