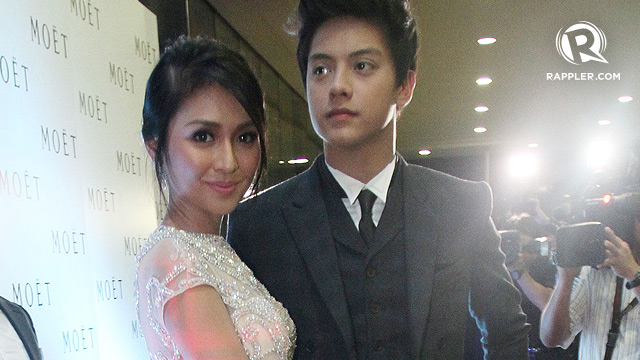 She’s Dating the Gangster first earned a following on social media-based publishing site Wattpad in 2006. The book became a bestseller in local bookstores Powerbooks and National Bookstore after its release by Summit Media in March 2013. Summit Media President Ms. Lisa Gokongwei-Cheng said the book has sold over 50,000 copies.

Although Bernardino admitted that she first had Gerald Anderson and Kim Chiu in mind back in 2006, she sees that Padilla and Bernardo are a great fit for the current generation.

Bernardino told Pep.ph that the teen stars, whose on-screen tandem KathNiel has gained a following, are a good fit for the roles because of their similarities to her characters.

She described Padilla’s TV persona as that of a “bad boy,” but she adds that much like Kenji, there’s still a sweetness beneath the tough veneer. Kathryn, she said, whose roles often feature underdogs with a fighting spirit, is a good fit with the character of Athena.

According to a tweet by Summit Media, the film, to be directed by Cathy Garcia-Molina, will begin filming in March. KathNiel recently starred in the 2014 MMFF entry Pagpag.

UPDATE: The movie She's Dating the Gangster, which will be directed by Cathy Garcia-Molina, starts filming in March. http://t.co/yfqHv5rzdC

Similar to the book, the KathNiel loveteam has established a solid fan base on social media. Individually, the two stars have each amassed quite a number of supporters on Twitter, both with over 2 million followers each as of writing.

News and latest updates about the Got to Believe tandem have, on several occasions, trended on Twitter, and this time is no exception.

I'm wondering why does She's Dating The Gangster is trending and I just figure out that KathNiel will be doing it as a film. :))

Ecstatic tweets and fan-made posters have already made rounds on social media. Here are some reactions from the fans, including an excited tweet from model and TV host Bianca Gonzalez:

KathNiel as the main cast of She's Dating The Gangster (movie)? omfg!!! it will definitely again arouse us to an ecstatic admiration! :)))

The news that KathNiel will portray the role of Athena Dizon & Kenji delos Reyes of She's Dating The Gangster made me happy! #thankyoulord

She’s Dating a Gangster is a partnership between Summit Media and Star Cinema, as part of the production house’s 20th anniversary celebration. – Rappler.com