May 10, 2012 9:09 AM PHT
Rappler.com
Facebook Twitter Copy URL
Copied
Jessica Sanchez sings a stunning rendition of "And I Am Telling You, I'm Not Going" 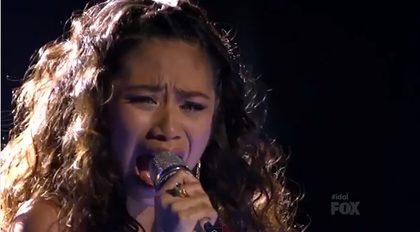 MANILA, Philippines [UPDATED] – In the final stretches of popular show American Idol, Filipino-Mexican singer Jessica Sanchez pulled out all the stops and showed off her big pipes during the performance night for the 4 remaining contestants.

On Wednesday evening, May 9, (Thursday in Manila), the judges stood up after Sanchez’s powerful rendition of And I’m Telling You I’m Not Going by Jennifer Holliday, a hit from the Dreamgirls musicale. She was oozing with raw emotion and ending her Jennifer Hudson-quality rendition in tears.

Watch her performance below.

So far, Sanchez has received 6 unanimous standing ovations for her competitive performances from the judges: 4 from solo performances (including I Will Always Love You, Everybody Has A Dream), one for group performance, and one for a duet with Joshua Ledet. This made her one of the front-runners in the competition.

Sanchez ended the performance night on a high note. She lived up to the Dreamgirls hit song after judges also leaped to their feet after co-contestant and another front-runner, Joshua Ledet “pulled off a near-religious experience of a performance” of James Brown’s It’s a Man’s Man’s Man’s World. (Ledet has 14 standing ovations so far.)

Judge Jennifer Lopez, who had unabashedly praised Ledet right before Sanchez performed, admitted that it’s going to be a “race to the finish” and she has no idea who will win because of Sanchez’s great vocal ability. “It was a real moment,” she added.

Randy thought that Sanchez was “really in it to win it,” noting that it’s one of the hardest songs in the world to sing, but she slayed it. “You guys are in it. You are phenomenal!”

Judge Steven Tyler called it “another winning performance” and “over the top.”

Singer-actress Jennifer Holliday, who played the Dreamgirls role and originally sang it on Broadway, also heaped praises on Sanchez. “Jessica, God gave you an amazing voice and tonight you sang your song of redemption. Gratitude to God for the save. I love you and your humble heart,” she tweeted.

On Wednesday, contestants tackled two songs: one themed California Dreamin’ – or songs by Californians – and songs they wish they had written.

This time, the 16-year-old singer was dressed more conservatively after receiving flak last week for her tight dress that was “too mature.”

With earthy growl and successfully harnessing her angsty inner blues side, Sanchez sang Steal Away by Etta James on the first half of the night.

Judge Randy Jackson said, “I love the whole vibe of that,” adding that she can tap into the soulfulness of Etta James even though she’s only 16, declaring that she could “sing the phone book,” as the old saying goes.

Jennifer Lopez said, “I’m happy to see that the growl was there from the very beginning” and that she thought it was “crazy” and that she could easily compete with any bigtime singer out right now. “[You’re] one of the best I’ve seen in a long time.”

Steven Tyler, said, “You just nailed that,” and that he loved it because “That showed the other side of your voice. You’re shaking off the old you and changing. That’s a good thing,”

Sanchez is the youngest contestant at 16. For the 1st and 2nd sets, she and her 3 rivals sang:

As show fillers, the last 4 contestants sang duets. Sanchez and Cavanagh sang Eternal Flame by The Bangles. Judge Jackson didn’t like it and thought that having both ladies on swings a-la Cirque du Soleil was “weird.” Lopez said the two have “sweetness and power.”

Phillips and Ledet sang This Love by Maroon 5. Host Ryan Seacreast joked and said that two men’s duet is a “bromance” called “Jillip.”

The remaining quartet also teamed up on Foreigner’s Waiting for a Girl Like You.

On Thursday, May 9 (Friday in Manila), the contestants with the highest number of votes will remain to compete for another week. if Jessica Sanchez joins Top 3, she would have par Jasmine Trias’ (Season 3) record for best finish of a Filipino-blooded finalist in American Idol.

The American Idol finale will air on May 23.

Days after, on May 27, Sanchez will perform on PBS’ National Memorial Day Concert at the West Lawn of the Capitol building alongside celebrities such as as CSI:NY’s Gary Sinise, Ellen Burstyn, Selma Blair, Dennis Franz, Natalie Cole and Chris Daughtry. She will sing the national anthem  “The Star-Spangled Banner” and ‘The Prayer.

Memorial Day also holds special significance to the young performer, as her father is in the Navy while her grandfather retired from the Navy.
The concert will also feature appearances from retired General Colin Powell and a heartfelt welcome home to U.S. troops who have been serving in Iraq and Afghanistan. – Rappler.com