MANILA, Philippines – Save for its extensive prologue set in the 1700s, Dark Shadows is set mainly in 1972. Its setting and characters may be fictitious but its dazzling showcase of sartorial, musical, and societal details are not. As the story unfolds, viewers are entreated to a smorgasbord of the hippie hedonism, psychedelic trips, paisley prints, and gritty tunes of the era — at least as people in the US had them then. It’s all a rainbow of mostly kitschy memorabilia that are a stark contrast to the Philippines of 1972, when the country got cloaked in the grave darkness of martial rule.

Dark Shadows, however, is not without its own dark/bright contrast. The dim counterpoint is supplied primarily by a newcomer to the era named Barnabas Collins, a former playboy made vampire by a spurned lover. Johnny Depp embodies the role with his familiar, deranged gusto, and it’s quite unbelievable that it’s only now, his eighth Tim Burton-directed flick, that he gets to play a fanged fiend. In Barnabas’ early encounters with random strangers and the modern-day residents of his old mansion, the fish-out-of-water — make that vampire-out-of-coffin — dynamics make for wicked fun, none more snide than when he spots the iconic, imposing McDonald’s logo and declares, “Mephistopheles!”

For a while, we get the impression that Burton and Depp are playing to moviegoers who might have been turned off by the grim violence and pessimistic tone of their take on the musical Sweeney Todd, an earlier collaboration about an even darker character. But the goth-loving duo’s main agenda this time is to adapt the cult favorite Dark Shadows, a supernaturally themed TV drama that ran from 1966 to 1971. (The uninitiated among us can catch it on YouTube.) Curiously, though, Burton and co-producer Depp’s approach — by way of scriptwriter Seth Grahame-Smith, author of Abraham Lincoln: Vampire Hunter — is less in the gothic soap opera mode of the original TV series and more in the camp, horror-plus-humor style of The Addams Family.

The laugh-inducing moments throughout this Dark adaptation, however, admirably avoid veering into sitcom terrain, with Depp and company mostly playing things straight, dispensing any comedic moment as incidental rather than intentional. Along the way, rich themes — such as family as one’s real wealth, childhood abandonment, domestic secrets, and humans being more fearsome than any ghost can be — blend in amid the occasional neck-biting, blood-sucking and literally wall-to-wall humping. (It’s rated PG-13, moms.) Viewers would differ with regard to the 2012 Dark Shadows’ memorable highlights.

There’s the feminist quip that is the film’s very first joke or the constant sight of Barnabas’ wide-eyed wonder at curiosities like the lava lamp and The Carpenters. There are the exquisite sets conceived by production designer Rick Heinrichs, who had art-directed Burton’s Batman Returns, and the fantabulous wardrobe conceived by costume designer Colleen Atwood, which are sure to be the stuff of this year’s Halloween and drag parties.

Memorable characterizations abound, with Eva Green towering as a delicious antagonist who can switch from resembling a foxy Angelina Jolie to Burton’s old girlfriend Lisa Marie. (Michelle Pfeiffer, a good sport, is Catwoman-ly sizzling even in her second-fiddle role.) Plus there’s a cameo by Alice Cooper who is game enough to be the butt of a literal gag while coincidentally looking like Tim Burton but with horrible makeup. 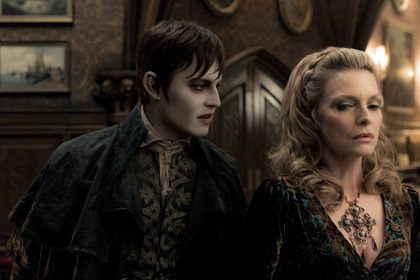 Yet overall, Dark Shadows is less than the sum of its parts. It does not approach greatness by Burton-Depp standards, the way Sweeney Todd, Ed Wood or Edward Scissorhands had. With its comical bits sandwiched by a straight-drama start and end, Dark Shadows does not go all-out-campy either, the way Burton did with the nonsensical yet memorable Mars Attacks!

And the story as a whole comes off rather uneven. Towards its tail end, the movie seems hampered by its limited, almost-two-hour running time, with certain plot developments resulting in a sudden turning point here or even a useless revelation there. (I could almost hear award-winning Pinoy director Lav Diaz, maker of anti-Hollywood, six-to-nine-hour epics, going, “Told you so.”) It’s all a swell enough party that’s mostly fun while it lasts, leaving no hangover as you leave the theater. Burton, Depp, witty-eerie musical scorer Danny Elfman and company seem to have had a generally merry playtime and not much more.

Here’s hoping that, while far more enjoyable than Alice in Wonderland, Tim B and Johnny D’s latest project would eventually compel them to come up with an opus that would truly be a wonder to behold. – Rappler.com