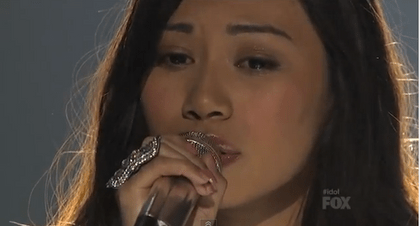 MANILA, Philippines – In a few days, Ryan Seacrest, the host of America’s most popular reality singing competition American Idol will once again utter the words that have changed lives of wannabe popstars for 10 years now.

And on Idol season 11’s final moments when he says, “The winner <pause> of American Idol <pause> 2012 <pause> is <one big pause>,” Pinoys both in the USA and here in their homeland Philippines will be holding their breath, praying for Seacrest to announce the name of the finalist with the Pinoy blood — Jessica Sanchez.

Filipinos are undeniably so into American Idol that the Philippines has become an extended market for the show. Weekly shows are shown in multiple channels at multiple time slots – with full advertisement load. Idol graduates have come and gone to perform, record, endorse and even take acting gigs in the country and last year’s batch even held their traditional Idol concert tour in the Philippines – the only leg outside of the USA apart from Canada.

The Filipinos’ love affair with American Idol started long before Jessica’s Idol journey and Pinoys — both contestants and fans — have been making their presence felt in the American Idol universe since the very first season.

Here are 10 memorable Pinoy moments on Idol that led to Filipinos becoming deeply engaged and involved, embracing this American singing show as their own.

10. He started it all. American Idol exploded into the Filipino consciousness only in Season 3 when two Filipino-Americans entered the final stages. But in Idol’s inaugural season, it was Brad Estrin who first represented Fil-Ams on the show. He entered the first semi-final voting rounds but failed to get enough votes to break into the finals. The following year, Jordan Segundo competed for Season 2’s semi-finals but also suffered the same fate. 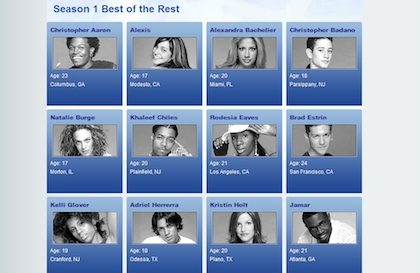 9. Sway hits high note. When you say Pinoys in AI, it’s the girls that will first come to mind but there are also some guys who showed Pinoy singing prowess on the Idol stage. In Season 5, Fil-Am R&B singer Jose “Sway” Penala performed “Reasons” by Earth, Wind and Fire, literally hitting a high note that amazed judges Randy Jackson and Paula Abdul and earned him a spot in the second semi-final rounds. Unfortunately, he was eliminated before the finals, and in the next season, another Fil-Am AJ Tabaldo followed the same pattern of being “almost there.”

8. From Smokey Mountain to Hollywood Hills. Ryan Cayabyab protégé and Smokey Mountain singer Zhar Santos disappeared from the Filipino consciousness when the group disbanded some time in the ’90s. But in 2005, Zhar reappered in the 4th season of Idol as Sharon Galvez, a waitress from Las Vegas who auditioned with a Whitney power ballad. She reached the Hollywood rounds before being cut in the Top 24 selection – a greater feat than that of Carol Banawa who was reportedly turned down in the Season 5 auditions.

7. Thia shines. When Idol lowered its age requirement, a number of young singing wonders emerged, including then 16-year-old Thia Megia. The Fil-Am teen vocalist impressed the judges during her auditions in Season 10 with her unique voice reminiscent of pop superstar Adele, but it was her performance in the semifinal rounds of the Fame classic “Out Here on My Own” that gained her fans who adored her perfect pitch and crystal clear voice. As the show progressed, she was criticized for always selecting ballads, and was voted off in the 4th elimination round of the finals.

6. Ready or not, here she comes. Fil-Am pancake waitress Camile Velasco from Hawaii turned up during Season 3’s auditions with her unique voice and style unheard of in Idol’s earlier seasons. Singing “Ready or Not” by the Fugees, she got lavish praise even from then Idol judge Simon Cowell, known for his acerbic critique and high standards. She was even compared by Jackson to her Idol Lauryn Hill. Camile went on to become one of Season 3’s two Fil-Am finalists (with Jasmine Trias) and ended her journey in the 9th spot.

5. Jasmine cries. After singing two disco hits in Season 3’s Top 4 rounds – Everlasting Love and It’s Raining Men – Fil-Am Jasmine Trias received heavy criticisms from the judging panel, leaving her unable to speak when Seacrest was already engaging her in the usual post-judging chit-chat. While giving out her number, Jasmine uncontrollably burst into tears. The next day, she was declared safe and one of the frontrunners, La Toya London, was sent home. Jasmine finished 3rd that season, the highest place for a Fil-Am before Jessica Sanchez.

4. We’re brothers forever. Among American Idol’s attractions are the funny and crazy auditions and one of the most memorable is the zany act of Season 7’s Philippine-born Renaldo Lapuz. Fully garbed in an odd costume of a feather hat and a silver cape, he sang his own composition – We’re Brothers Forever. Though he didn’t pass (he’s also way above the age limit), his song became an online viral hit, and he was invited back to the finale night to sing his song accompanied by a full marching band.

3. Pinay 2 are Bottom 2. In the results night of Season 3’s Top 9 round, both Fil-Am community bets Camile Velasco and Jasmine Trias were sent to the Bottom 2 in the Elton John-themed week. After performing an encore of their respective songs, it was announced that Camile was voted off and the two Pinays embraced each other in probably the longest elimination hug ever in the show’s run. Jasmine also wiped Camile’s tears, a gesture that touched their Pinoy fans everywhere.

YouTube video of a feature on Camile Vealsco by the Probe Team Documentaries which aired on ABC-5. The elimination clip starts at 4:40.

2. Malubay is Proudly Pinay. There has already been a number of Filipino Americans who rocked the Idol stage but Season 7’s 9th place finisher Ramiele Malubay has got to be the one who showed the most Pinoy flavor. Her behind-the-scene clips are absolute Pinoy moments, declaring Regine Velasquez as her favorite singer (she also listed Lani Misalucha and Nina as influences in her Idol site bio). She also declared that she’s in the competition to represent Asians and during her auditions, she said she would like to replicate “Jasmania,” a term coined to refer to the Jasmin Trias craze in the Philippines. If there’s still doubt that she’s Pinay, know that during her run in the show, she would repeatedly exclaim, “Oh my vegetable!” which is of course a translation of you-know-what-this-expression-is.

1. The next Whitney is Filipina. Considered by many as one of Idol’s best moments in its 11 seasons, Jessica Sanchez’s performance of the Whitney Houston anthem, I Will Always Love You, excited Pinoys tremendously as it is the performance that proved the Filipina who has a real strong shot of winning the Idol crown has finally arrived. Attacking the monster song at 16, this performance made believers out of the judges who willingly stood on their feet. In a few days, Jessica will attempt to become the first Asian to be crowned American Idol, the youngest Idol champion and the girl to break the show’s four-year, all-male winner streak. If that happens, you already know what deserves to be on this list’s number one spot. – Rappler.com