MANILA, Philippines – Is social media the new exit poll? Could the online buzz and virtual fan base of the last two remaining bets for this year’s American Idol predict the winner?

While Filipinos all over are rooting for 16-year-old Jessica Sanchez who has Filipino roots, her chances against Philip Phillips who fits the usual white-man-with-guitar profile of past winners may be tested against this new crystal ball.

After all, the success of predicting the influence of social media on contests of many forms has increased over the years since more people are now online (hence an increase in true representation) as well as improvements in the algorithms themselves.

Businesses, economists, stock traders and political consultants have been feverishly divining trends on social media over the past years to try and find correlations between numbers and actual results.

Just recently, an article appeared that spoke of Twitter sentiment as it related to Facebook’s IPO price. And in March of this year, Forbes.com published another article on a study about Twitter chatter and stock prices. The same is true with elections and all sorts of crowd decisions.

Research firm Zaba Research has been doing their own track of this season’s American Idol and has regularly published its findings. Most of these data companies use complex algorithms, data mining software and significant bots to cull data from various social media sites and blogs all over the world.

So who will this year’s American Idol winner be?

Rappler conducted its own research across the social media sphere to see just what the net has to say.

We did not deploy any bots, nor did we have access to sophisticated software and algorithms. But like any journalist, we did have search engines, a keyboard and hopefully, some grey matter to support this quest. On Twitter, Jessica is also ahead of Philip by about 71,000 followers. After this week’s performance, her new followers increased by 14,000 and just last Saturday, May 19, Jessica added 22,000 followers in one day.

We believe the follower count is showing increasing inertia in favor of Jessica.

On American Idol’s Youtube channel, we tracked the growth in views of both Jessica and Philip’s performances last week. We see some interesting results.

The views of Jessica’s 3 performance videos grew by 61.3% from Saturday to Sunday, while Philip’s grew by 50%.

We believe that the views of Jessica’s performance videos indicate a level of inertia in favor of Jessica.

Klout is an indicator of engagement, how influential your followers are and how they respond to you. Kred is another measure of online influence, which is gaining traction in the industry.

Between both these measures, we also see Jessica with a slight lead over Philip. This could be the result of a slightly younger Jessica being more engaged with her online community (refer to the number of tweets she has vs. Philip). 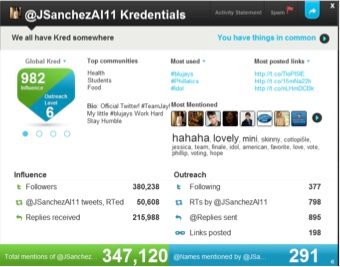 Both finalists have shown huge overnight spikes in their klout scores with Jessica adding just a bit more than Philip. But with 3 days to go, this is still a toss-up on klout and Kred.

We do note that Philip has the lead over Jessica on Peerindex (another social influence measurement tool).

PeerIndex primarily measures Twitter influence. Unfortunately, both finalists’ accounts are fairly new and Peerindex has yet to mine their accounts to their fullest. 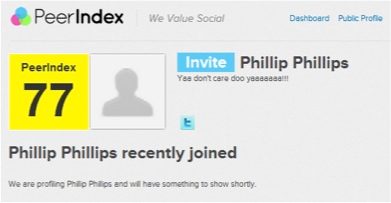 But here’s where it gets juicy. Sentiment tracking is not a perfect thing. This mines words like “like”, “hate” and gross negatives and positives usually associated with these words like “love” and “go home” across the net.

These trackers usually only mine words in English and so Spanish, Tagalog etc. are mostly ignored. Colloquialisms and jargon/net speak are iffy at best.

Having said all that, sentiment is arguably the most important of the online indicators since this reveals one’s personal preference about something or someone.

And this is where it gets very fascinating.

Jessica’s two-day result on socialmention.com shows a decrease in positive sentiment towards her.

Her sentiment ratio (number of positives vs. negatives) has gone down. Her positives have dropped while her negatives have increased. Equally important, the neutral sentiment has also decreased — a possible indicator of people making up their minds about her.

Philip, on the other hand, has remained steady in sentiment.

There is also a drop in the positives BUT his negatives have also dropped.

Jessica’s sentiment score still remains overwhelmingly positive and 3 times that of Philip but there is that drop that one should be mindful of.

This is also reflected in Sentiment140’s measurements.

Two days’ worth of measurements does not make a trend so it’ll be interesting what the data says over the coming days.

Finally, twitrratr shows Jessica slightly ahead in positives and nominally lower in negatives vs. Philip. But it is important to note that there are an overwhelming number of neutral tweets.

Again, it will be important to visit the measurement over the coming days.

What does this all mean? Early indications tend to favor Jessica as the next American Idol but there is concern that the sentiment is not holding up.

More importantly, these numbers reflect past performances. How the finalists perform on finals night and the measurements we take during the show and over the voting window after the show will give us a stronger indication of who will win.

Watch out for more! – Rappler.com